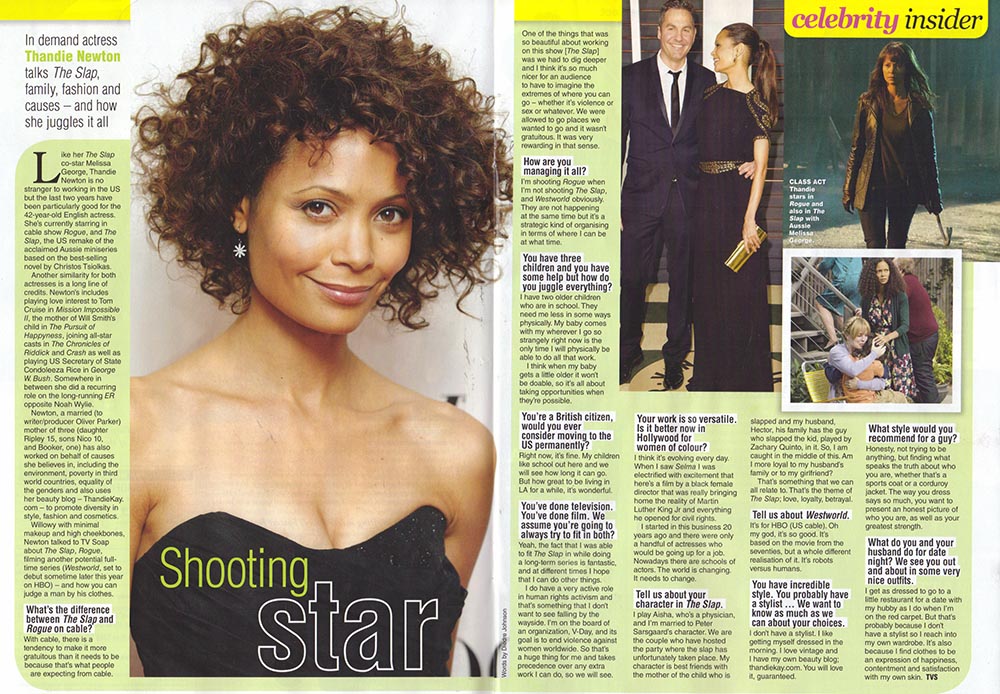 In demand actress Thandie Newton talks The Slap, family, fashion and causes – and how she juggles it all

Like her The Slap co-star Melissa George, Thandie Newton is no stranger to working in the US but the last two years have been particularly good for the 42-year-old English actress. She’s currently starring in cable show Rogue, and The Slap, the US remake of the acclaimed Aussie miniseries based on the best-selling novel by Christos Tsiolkas.

Another similarity for both actresses is a long line of credits. Newton’s includes playing love interest to Tom Cruise in Mission Impossible Il, the mother of Will Smith’s child in The Pursuit of Happyness, joining all-star casts in The Chronicles of Riddick and Crash as well as playing US Secretary of State Condoleeza Rice in George W. Bush. Somewhere in between she did a recurring role on the long-running ER opposite Noah Wylie.

Newton, a married (to writer/producer Oliver Parker) mother of three (daughter Ripley 15, sons Nico 10, and Booker, one) has also worked on behalf of causes she believes in, including the environment, poverty in third world countries, equality of the genders and also uses her beauty blog — ThandieKay com — to promote diversity in style, fashion and cosmetics.

Willowy with minimal makeup and high cheekbones Newton talked to TV Soap about The Slap, Rogue, filming another potential full- time series (Westwor/d, set to debut sometime later this year on HBO) — and how you can judge a man by his clothes.

What’s the difference between The Slap and Rogue on cable?

With cable, there is a tendency to make it more gratuitous than it needs to be because that’s what people are expecting from cable. One of the things that was so beautiful about working on this show (The Slap) was we had to dig deeper and I think it’s so much nicer for an audience to have to imagine the extremes of where you can go — whether it’s violence or sex or whatever. We were allowed to go places we wanted to go and it wasn’t gratuitous. It was very rewarding in that sense.

How are you managing it all?

I’m shooting Rogue when I’m not shooting The Slap, and Westworld obviously. They are not happening at the same time but it’s a strategic kind of organising in terms of where I can be at what time.

You have three children and you have some help but how do you juggle everything?

I have two older children who are in school. They need me less in some ways physically. My baby comes with my wherever I go so strangely right now is the only time I will physically be able to do all that work.

I think when my baby gets a little older it won’t be doable, so it’s all about taking opportunities when they’re possible.

You’re a British citizen, would you ever consider moving to the US permanently?

Right now, it’s fine. My children like school out here and we will see how long it can go. But how great to be living in LA for a while, it’s wonderful.

Yeah, the fact that I was able to fit The Slap in while doing a long-term series is fantastic, and at different times I hope that I can do other things. I do have a very active role in human rights activism and that’s something that I don’t want to see falling by the wayside. I’m on the board of an organization, V-Day, and its goal is to end violence against women worldwide. So that’s a huge thing for me and takes precedence over any extra work I can do, so we will see.

Your work is so versatile. Is it better now in Hollywood for women of colour?

I think it’s evolving every day. When I saw Selma I was electrified with excitement that here’s a film by a black female director that was really bringing home the reality of Martin Luther King Jr and everything he opened for civil rights.

I started in this business 20 years ago and there were only a handful of actresses who would be going up for a job. Nowadays there are schools of actors. The world is changing. It needs to change.

Tell us about vour character in The Slap.

I play Aisha, who’s a physician, and I’m married to Peter Sarsgaard’s character. We are the couple who have hosted the party where the slap has unfortunately taken place. My character is best friends with the mother of the child who is slapped and my husband, Hector, his family has the guy who slapped the kid, played by Zachary Quinto, in it. So, I am caught in the middle of this. Am I more loyal to my husband’s family or to my girlfriend?

That’s something that we can all relate to. That’s the theme of The Slap; love, loyalty, betrayal.

Tell us about Westworld.

It’s for HBO (US cable). Oh my god, it’s so good. It’s based on the movie from the seventies, but a whole different realisation of it. It’s robots versus humans.

You have incredible style. You probably have a stylist … We want to know as much as we can about your choices.

I don’t have a stylist. I like getting myself dressed in the morning. I love vintage and I have my own beauty blog; thandiekay.com.You will love it, guaranteed.

What style would you recommend for a guy?

Honesty, not trying to be anything, but finding what speaks the truth about who you are, whether that’s a sports coat or a corduroy jacket. The way you dress says so much, you want to present an honest picture of who you are, as well as your greatest strength.

What do you and your husband do for date night? We see you out and about in some very nice outfits.

I get as dressed to go to a little restaurant for a date with my hubby as I do when I’m on the red carpet. But that’s probably because I don’t have a stylist so I reach into my own wardrobe. It’s also because I find clothes to be an expression of happiness, contentment and satisfaction with my own skin. TVS