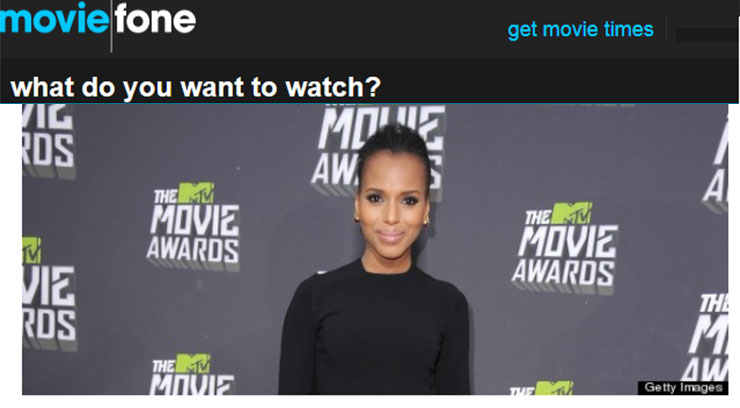 If movie and primetime TV stardom are the dreams of most actresses, then Kerry Washington is living the dream. At 36, she’s starred in many well-known films including this year’s Oscar award-winning film “Django Unchained,” the award-winning “Ray,” “Last King of Scotland,” and her hit TV series, “Scandal.”

While she plays the love interest in “Peeples,” the movie is not your standard romantic comedy. When she sat down with Moviefone, Washington discussed her taste for quirky, off-the-beaten path roles and revealed a part of her past that makes her well-suited for the role of Grace, a high-achieving daddy’s girl in a upper-middle-class African-American family.

You play a part of what can be called the black bourgeoisie. Did you do anything special to prepare for that? I always prepare. I like to study and research and prepare, but my family used to rent a home every summer in the Hamptons, in Sag Harbor when I was a kid. It was something that my parents decided not to do when they bought a house in upstate New York, so I don’t really belong to that community, but I knew it.

How important is it for audiences to get and understand the bigger subject in the movie, dishonesty and denial within families? I feel like the message of the film is to really be yourself and I think that’s a valuable lesson for everybody, no matter who you are, and it’s such an important lesson for growing up and being a grownup. And being a grownup is letting go of the person your family expects you to be and learning how to bring your adult self and your childhood self together and be just one authentic human being, so I think it’s a journey that a lot of people identify with.

How important is it for all audiences to get and understand this element of black culture and society? I don’t know. I’m not sure that’s necessarily the point of film. I’m sure it’s a fun part of what happens when you see the film; a lot of people are led into a culture that perhaps they wouldn’t have known about before, but I think that happens a lot in film. I think that’s one of the great things about what we do is that we allow people into worlds they don’t have access to.

One of the things I really love about this film is that it is grounded historically, geographically, and socio-economically important, this community of African-American’s living in Sag Harbor. It’s a fun little thing to know about but, at the same time, you could make this film with a Latin-American family, an Asian-American family, an African-American family, a Caucasian-American family and you could make the same movie in another community — say it’s South Hampton or Pasadena — so while the film is specific, at the same time, everybody can relate to it. It doesn’t feel like a chick-flick or men’s comedy, or a movie for older people or younger people. I saw the movie with my parents and they were talking about how there really is something for every age.

In what ways, if any, could you relate to Grace? I relate a little bit to Grace’s perfectionism. I think I’ve tried to let go of some of that as I’ve gotten older, but I can relate to that kind of pressure that we put on ourselves to get it right and be right.

Based on your roles in “Mr. And Mrs. Smith,” “Last King of Scotland,” “Life Is Hot in Cracktown,” “Save the Last Dance,” “Our Song,” and others, your characters have been very diverse, making you hard to pin down as an actress. Is that intentional? I think I am drawn to diversity in my work. I think one of the things is I get to be other people in other times and places and situation, and so rather than be intimidated by people who are different from me, I’m really curious about characters that are different from me. I’m always curious to identify with characters that are always different from me. How do I make that real, how do I find the connections?

But also I’ve been really lucky that, for most of my career, I’ve been a character actor. I’ve sort of worked to disappear into different characters, whether it’s a teen mom is “Save the Last Dance” or a transgender woman in “Life Is Hot in Cracktown.” I’ve really tried to disappear into roles, and I think I’ve been really lucky, in that most of my career I haven’t had to pressure to try to be a leading lady, even in s film like “Ray,” where I was a leading lady, it was still such a character-driven role. So I think that’s been a real blessing and a gift as part of the journey.

What tier do you think you fall into now, A-list? I don’t buy into that. I wouldn’t even begin to engage with that sort of thing. I have other people on my team who can think about those things so I don’t have to.

What was it like working with veterans Diahann Carroll and Melvin Van Peebles of “Sweet Sweetback” fame? To have the opportunity to be on the set with them was so tremendous. The day that we shot the big scene with Epatha singing and we had the guitar and we were at Nana’s house, that was actually our first day of the film and we got to start the film with these legends and Diahann gave a speech on the ride to work that morning and she gave this really encouraging speech that was as she is, so gracious and filled with gratitude and love and support. And once we spent the rest of film trying to live up to their legacy and make them proud.

“Peeples” director Tina Gorgon Chism just sold her screenplay “Inheritance” and is teaming up again with producer Stephanie Allain for the movie, would you star in it if she asked? I would work with Tina again at the drop of a hat.

What do you remember most about working with her? Tina just does a really great job at being a shot caller, and also being collaborative and generous and also allowing people to have ideas and contribute to the process. And I think that can be a tricky balance for directors, but she does it with a lot of grace and beauty.