Phillip Boutte Jr. is part of the team behind the tribal, yet tech, costumes we see in box office smash  Black Panther. Boutte drew illustrations and collaborated with costume designer Ruth Carter to create the garments worn by heroes and villains alike in the fictional East African nation of Wakanda. Those include warrior outfits, the adornment of the Wakandian elders, their allies, the Jabari tribesmen and Black Panther’s superhero costume.

Boutte is no stranger to the drawing board. He’s worked on the complete Hunger Games franchise, Star Trek, X-Men, Guardians of the Galaxy, the TV series Agents of S.H.I.E.L.D., Altered Carbon and the results of his work will next be seen in the Oprah Winfrey/Reese Witherspoon film, A Wrinkle in Time. He’s also working on the upcoming Captain Marvel. 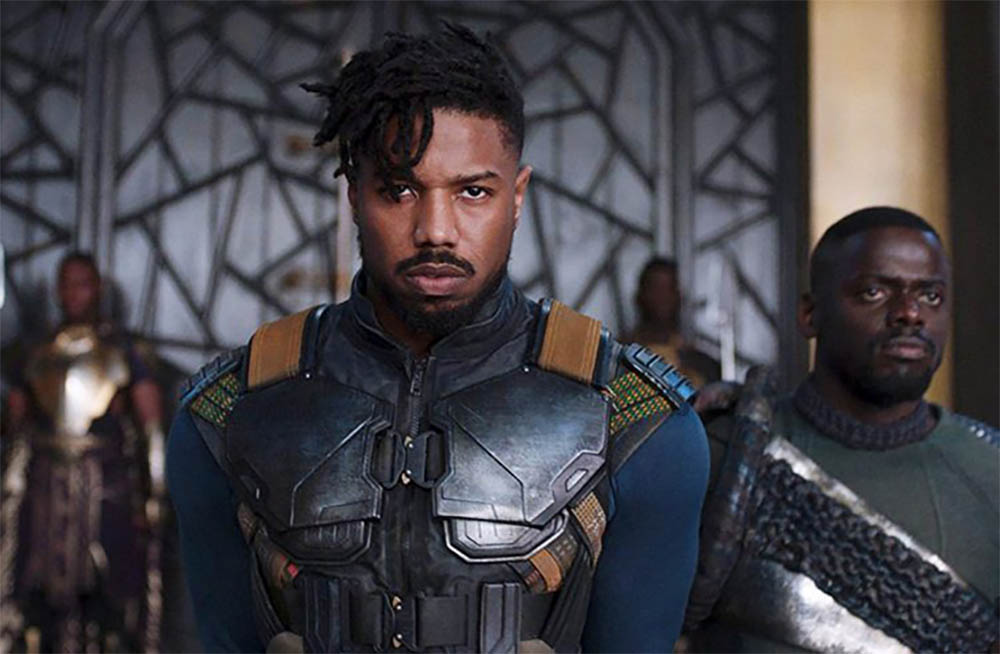 Here he talks to Mandy News about his career so far and everything Black Panther.

What was your vision for the costumes of Wakanda?
That was with my good buddy, Ruth Carter, who’s amazing. We started on the project together. She’s done a lot of projects. She worked with Spike Lee for 15 years. So her main focus was the nerd part of it. I was looking at it like, “the comic book is this…”

Her main focus was, “now that we know what these things look like, let’s try to infuse them with African culture so that it means something.” So if there are bees on the costumes, she wanted to [explore] a specific tribe and try to figure out what that symbolises. Does it symbolise beauty? Does it symbolise strength, power, marriage, death?

So we started to research all these tribes and it was really great. It was a project where every day I was surrounded by these huge boards in the office. There was a map of Wakanda and nothing but boards of different African tribes and who they are; their names and how they make their stuff. That really helped.

We also started to look at more modern things; Afrofuturism, Afropunk, trying to figure out the hipper, more contemporary version. What I continued to bring to the table is that Wakanda, to me, is more like Timbuktu. If you know the story of Timbuktu, the king there had all the gold. He was super rich. Europe was always trying to raid TImbuktu but it’s situated in a place that’s super hot. The desert is super hot so you would just die trying to get there.

Timbuktu also had a strong military so if you did get there, you’d probably be overwhelmed by them. So to me that’s what Wakanda is, if it were never touched by European influence, if it were allowed to prosper. So we built out from there.

It’s like saying what would Africa be like if it were never touched by European influence or if it were never raided or if the world didn’t take all their resources and leave them with nothing. What happens if Africans have access to complex textiles? Then maybe they have their culture. So someone has scarification but then someone has also launched some cool jacket that has pieces cut out of it so you can see the scars on their torso. It was that type of deal. Let’s have fun with it and see that vision of Wakanda. What if they have all their resources and still have their culture? That was really exciting to me.

Your drawing for Shuri in Black Panther remained true in the film except your drawings made her just a little bit more warrior-like, with face paint. What was the process of changing her into a camera-ready Black Panther nerd heroine?
The main goal was to make her understated. She’s younger and she needs to be fun. Ruth kept saying “I don’t want her to look overly sexualised. I don’t want her to look older. I want her to be young but smart and powerful.”

When I saw it on screen, I was like, “She’s perfect!” The actress Letitia Wright was perfect because she exudes this playfulness and strength. There are complex scenes that are brought forth in the film and things that we all talk about that we need to know but she also does it in a way that feels like a fringe, where it feels approachable. It doesn’t feel as heavy as some of the other characters but she is also this brilliant brain that is coming up with all of these things. She’s just super smart so her clothing reflects that. She might wear black but then a bright orange underneath it, something really fun.

I think my illustration is a lot more colourful than what ended up there but I think that was Ruth playing the concept of wanting one big pop-up colour or something that was fun and then she understated everything else to balance it out.

Your credits are amazing, Black Panther, Altered Carbon (the TV show) and A Wrinkle in Time the same year. Please give your thoughts on this much success.
I always put it into perspective in that it is all relative to the fact that I am able to, luckily, work for a lot of different costume designers. I tell the students that I work with that you have to work hard and you have to put your best foot forward and do the work but you also have to get along with people. I think one of my strong suits is that I am a people person. I know how to talk to people and be professional but I also enjoy people.

At work, one of the stronger features I have is not getting hired but getting re-hired. I have worked for so many different designers, which is why I am able to work on so many different projects and conceptually be able to grow and build my portfolio. I am also able to get re-hired by those same designers.

In retrospect, I know I work a lot more than some of the other illustrators because they work on other projects and switch in and out of costume but I’ve been primarily costume the past, almost, 11 years. In that time I’ve built a repertoire of some of the top costume designers that I work for and there are so many of them. Also, because I’ve built up that rapport and trust, I am able to come in and conceptually help them in a way that they need.

The projects are so fast now that the designer is not going to be able to design everything so they bring us in to flesh out a general idea. We’re collaborating with them. We’re designing on a daily basis but it does allow me to work on stuff and it also has helped me to be the big nerd that I am and know these projects really well. I read [comics] so it’s really fun for me to take a stab at them.

On my first day, I read the script or an outline or whatever and then talk to the costume designer. The costume designer has normally prepared these things on a mood board, which is a big board where they print out pictures from Pinterest, Google or a research book. They are separated by character. For character one, they will have their name and then all these pictures will give you a general impression of who that person is or who we think they are. If they are an eloquent dandy, there’ll be tons of pictures of dandies in hats and neckties, depending on the time period. It may be a woman in the fifties so there will pictures from the Macy’s catalogue of that time.

From there I work a 10-hour day minimum and I am drawing on my computer and trying to figure stuff out. I build up a body of the character and then, with the costume designer, try to figure out how to dress them. So it’s a very back and forth effort.

How does one take on Hollywood when they have this ambition?
My job is very specifically a niche job. I think it’s character design for sure so a lot costumers are interested in working in it since what I’ve learned is character design is costume design. It’s a pipeline into figuring out who people are, why they do what they do.

You have to be inquisitive that way and I think, have basic knowledge of clothing. I went in not knowing any of this. I just knew I like drawing people and costume and character. So the more detailed you can get with figuring out, for example, in this period, the seams on the shoulder were in a certain place or the pockets were shaped a certain way…Once you get past all that you have to join the Costume Designers Guild and that was my entryway into working with costume designers.

Is that a Catch-22?
I have a lot of friends and colleagues that I work with and in, sitting on the board, because it allows you to work but also, as an illustrator, when you are freelance, freelancing can be difficult. Everybody kind of understands that regardless of what profession. At least with the ‘Guild,’ there is a certain amount of protection so you don’t have to worry about people not respecting the work you do or trying to pay you less than what you are worth. There are things set in to protect you. I am really pro-union, pro-labour. That is something that has been hugely beneficial to my career as an artist.

It’s Hollywood though, so it is very competitive.
It is but I always try to tell people, I’ve been in the industry since I was three. I was an actor from three to sixteen or seventeen. Once you’re inside you can see what a small bubble it is and it can seem very intimidating from the outside. It seems so magical. But it’s like everything else. It’s networking. It’s meeting people. If you have general direction, I tell everyone to focus specifically on what you want to do.

If you want to be an actor, go out and film your scenes, don’t wait for someone to put you in something. You have phones and stuff, film a scene and for artists it’s the same thing. If you want to work on superhero movies, draw a superhero. Go and translate them. If you want to work for Marvel someday then you should be drawing characters, painting them out, figuring out likenesses of actors and then trying to translate those materials in the way you would see them in the Marvel universe.

If you want to get into the industry, the best thing to do is put yourself out there. You want to do costumes, come join the guild, show your portfolio. If you’re not ready to do that, build up your portfolio but it is approachable.