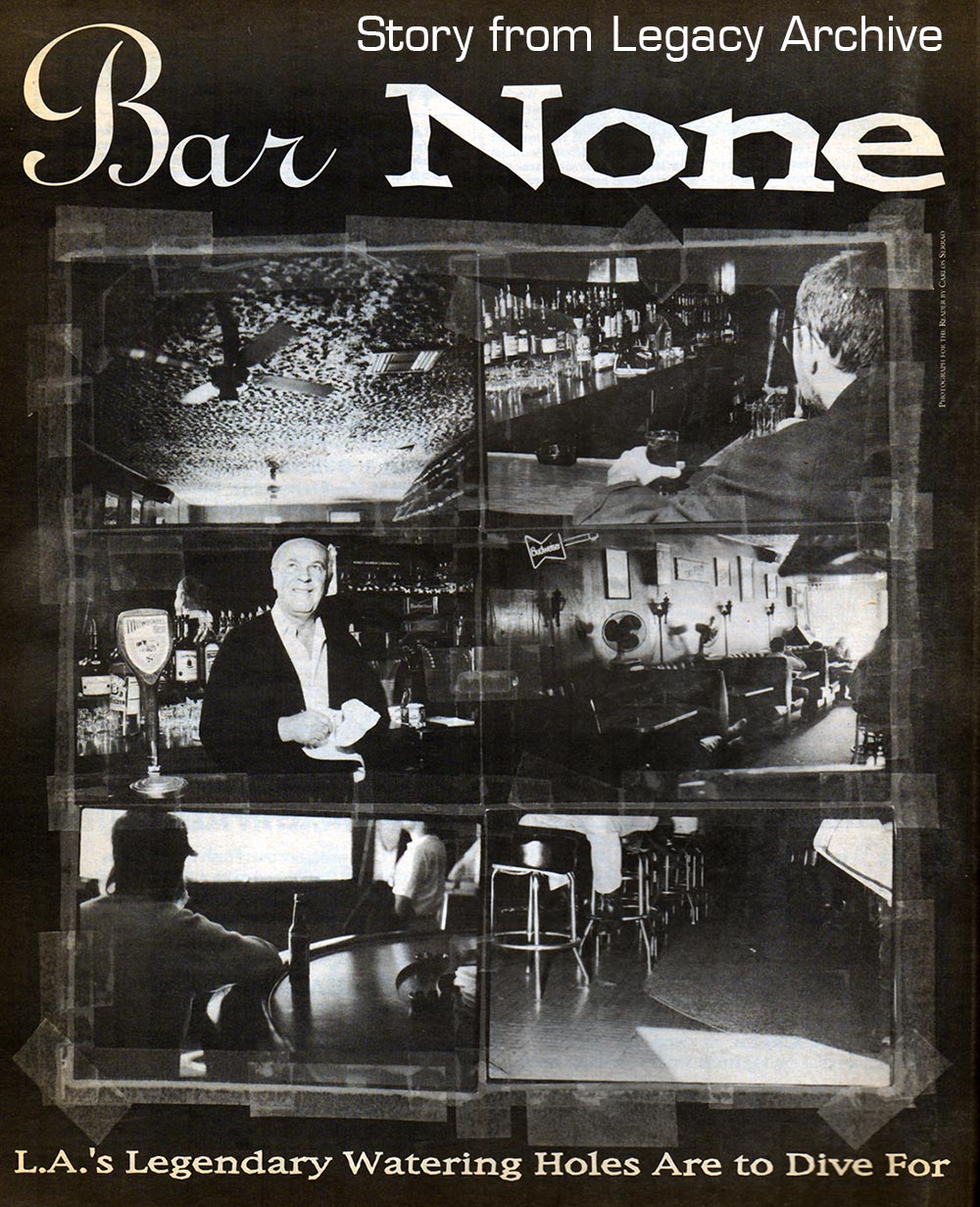 It’s 4 p.m. at the Ski Room, a vintage dive bar on the east end of Sunset Boulevard. It’s hot outside, and the Budweisers and Amstel Lights look as appetizing as mirages in the desert.

A generation ago, Judy Garland would drop by. Charles Bukowski’s idea for Barfly was born after many liquor-soaked afternoons here. And the customers here today aren’t your typical happy-hour clientele: They are retirees, vets, and artistic types just cooling out.

The Ski Room, like a lot of neighborhood bars, is perfect for those who like to talk and imbibe. Most regulars aren’t looking for a pick-up (although there probably wouldn’t be any objections); they go because they like it. And, in spite of Los Angeles’s health obsession, people are still drinking. They’re drinking out of boredom, to have fun, to meet someone, because someone left them, because they’ve read too much Bukowski or listened to too many Frank Sinatra songs, or for the pure pleasure — or hell — of it.

According to the local Department of Alcoholic Beverage Control, there are twenty-four liquor-licensed bars in Hollywood and West Hollywood alone. This figure excludes other night spots, including restaurants with bar areas or combination bar/billiard-bar/whatever venues. Here is a sampling of watering holes around town.

Wednesday, 9 p.m. The first thing I notice is that the guy at the end of the bar looks a lot like Richard Gere. This I even before having one of the Tiki Ti’s famous exotic drinks. These drinks are served in sturdy glasses with plenty of fruit, and all of them cost five or six dollars. None cost more, none cost less. As I watch bartender-owner Ray Buhen and his son Mike mix my rum-tinged concoction, I wonder if the actor look-alike will still look that way after I’ve imbibed.

Ray Buhen has been mixing drinks at the Tiki since before the Beach Boys were in diapers. But he was a South Seas enthusiast long before that: In the 1930s, he tended bar at Don the Beachcomber.

The drink he’s fixing me tonight is called “Ray’s Mistake,” although I doubt that he’s making one: Both Buhens fix drinks with a chef’s finesse.

Most of the stools are full, and a group of twentysomethings hold court at a corner table, but the Tiki really gets crowded around 9:30 p.m.

Names of bygone and current regulars are carved into blocks of faux wood that line the wall behind the bar. A Buddha baby sits atop a miniature waterfall. To the left is a lava lamp and a wave machine with a mysterious flashing dot in the center. Buhen says all drinks are on the house if the flash ever goes out. (It doesn’t.) Someone makes the obligatory pass as I head toward the ladies’ room, which you enter through a beaded partition straight out of Hawaii Five-O. Back at the bar, Buhen tells me his favorite drink is, surprisingly, a Scotch, straight up.

Thursday, 6 p.m. If you blink, you’ll miss the Coronet because it sits, somewhat unobtrusively, between Trashy Lingerie on the left and Blockbuster Video on the right. If you’re in consumer mode, you’re likely to overlook it. But if you’re in the mood for a casual bottle o’ brew, this may just be the place.

The fifteen-year-old “Net” has a large following among the West Hollywood crowd, below-the-line industry types, and a few high-profile actors.

“Every night that I come here, it’s always different,” says Diana Posey, a public relations director. “I like the pub atmosphere. I’m from New York.”

“People come here for the casualness,” says bartender Chris Hackett, who adds that he “never shorts shots” and that the bar prides itself on not having beer on tap. Instead they serve bottles of Red Stripe, Amstel Light, and Rolling Rock. Beers cost $2.50; vodkas, scotches, and mixed drinks range from $3.50 to $5. With restaurants and the Coronet and Court theaters close by, the bar gets plenty of spillover. Kelsey Grammer, Kiefer Sutherland, Jason Patric, Laura Dem, Nicolas Cage, and Glenn Close have all found their way to the Coronet.

Former bartender Rod Castillo, now the owner of the Cinema Bar in Culver City, says he likes the variety of personalities that come together here. “You see people interacting with each other.” The Trashy Lingerie Softball Team walks in. Hackett starts shaking the margaritas.

Thursday, 7 p. m. Neatly tucked into a North Hollywood mini-mall, Residuals isn’t the kind of place that evokes industry glamour. But, as its name suggests, it is a hangout for actors, singers, musicians, and the like. The walls are lined with framed music posters and witty remarks on the art of “getting tight.” The bathroom doors read “honey wagons,’ just like on the set.

The waitress comes over to take our order. We decide we’re hungry and then find out there is no kitchen. But, we learn, Residuals keeps a notebook of nearby restaurants that deliver (including several right in the mini-mall).

” [ The owners] thought about adding a kitchen] for a while,” says bartender Ron Lewis. But, he says, they decided against it because of all the complications involved with serving food. “This way people can sit here and get any kind of food they want,” he says. “We even have a menu for Popeye’s.”

Craig Tennis, one of Residuals‘ ten owners, says the concept behind the bar was a New York state of mind. “There was no place to hang out, so … when I was looking for something to do, I was reminded of that.” More than eight years later, Residuals is thriving, if not downright hot. It is a neighborhood establishment in a neighborhood where the guy next to you may have just done a guest shot or signed a record deal.

Regulars sit around discussing careers. Romance doesn’t appear to be on the agenda, although Roseanne and Tom Arnold did throw their engagement party here.

Friday is band night, and on Sunday night karaoke rules. But don’t expect to hear your usual soused warblers. “There are so many people in the recording industry that are in here, that no one wants to get up there unless they’re so well established that they can’t hurt their career,” says Tennis.

Monday, 6 p.m. It’s so crowded here that I’m almost sideswiping people just to belly up to the bar. The bartender wears a T-shirt that reads, “Just Because I’m Moody Doesn’t Mean You’re Not Irritating.” His name is Alex. He sizes me up, tells me he doesn’t have much time to talk, and that I should order something. If Alex is morose, at least the patrons are pretty festive. Especially so today because it’s a celebration of the regulars’ birthdays. Names of those born during the month are pasted on the mirror overlooking the bar, and a tempting buffet looms in the comer.

The Blacklite is known for being a gay bar frequented by transvestites. However, it breaks a few stereotypes. “It’s a mixed bar,” says Millicent, a nattily dressed regular. “In the daytime, it’s straight nighttime, it’s drag queens.’

The jukebox is filled with an eclectic assortment that includes everything from Bobby Darin to Clint Black. Beers run $2 (Sharp’s and Budweiser seem to go fast), while the standard cocktail is $2.25; $2.75 is the most you’ll spend for a stiff one.

Wednesday, 6:45 p. m. Downtown’s Redwood Saloon Restaurant and Bar has been around for forty-five years, long enough to have hosted a few bureaucrats and a lot of Journalists (it sits one block west of the Los Angeles Times). The walls are decorated with framed photographs of such personalities as Ronald Reagan, in his Western movie star days, and musician Herbie Hancock, and a framed front page of the last issue of the Herald Examiner.

There’s a lottery machine to your right as you enter; farther right is a wooden phone booth much like one Clark Kent might use to change clothes. Near the cashier’s desk is the “red phone” — the one used by Times’ reporters to call the newsroom.

Bartender Jesus Delgado has seen a lot in his thirteen years here: mayors Tom Bradley and Richard Riordan, and City Councilman John Ferraro, but what he remembers most are the people who came from Chicago and said they’ve heard of the Redwood because Chicago is the home town of one of the owners, and the couple who met here and later married in the back room, and the guy who came back after thirty years to see Alice the waitress, who still works here, or the one customer who didn’t want to pay his tab and called Delgado a derogatory name — until the police sitting nearby intervened.

Delgado says the Redwood has many customers and few problems because “the Redwood isn’t a snob bar. Here you can come in dressed or like a bum, we serve you.” As we chat, several couples arrive, and Delgado rushes to serve them. Jeff Henderson, a systems administrator for the Times, says the Redwood is a regular hangout. “At the end of the day It’s nice to have someone know what  you want,” says Henderson. “Your friends know where to find you at 5 p.m.” But, he says, he has taken sabbaticals for five or six months. “What’s strange is that when you come back, the same people are here.”

Thursday, 8 p.m. The place fills up relatively early tonight because a large group comes in after attending a screening across the street. That’s not all: Intense pre-production conversations can be heard in various corners. A guy walks in talking on his portable. Bartenders Erik and Erika are moving fast, serving up Amstels, martinis, and Glenlivets with efficiency. I order a strawberry margarita and vow to stay away from the Purple Hooter advertised on the wall. I’m told it’s a mix of among other things Drambuie, Absolut vodka, and 7- Up.

A piano bar and DJ booth are located to the left of the entrance, and you can order meals and mean plantains in the restaurant area. “I meet friends here,” says Kevin Kassover, who works for a producer. “The ambience is different. You don’t feel like you’re in a city.”

“People come in and tell me their life stories,” says Erika. “I guess it’s part of being a bartender.” Regulars say there is no snobbery despite the posh veneer and Beverly Hills address. “Everybody from Ike Turner to Kato Kaelin to some of the East L.A. homeboys come here,” says Roderick Ward, a musician with The Tonight Show.

Thursday, 10:30 p.m. The Formosa is adorned with pictures of former, faded, and future stars, and tonight it is packed. American and Chinese food has been served in the back restaurant area for years.

Vince is tending the bar when I arrive. When he tells me he’s been coming to rthe Formosa since he was about five years old, I don’t make the connection. Then he smiles and tells me his father, Bill Jung, owns it, and the two have been bartending together for about a year.

Last year the Formosa was the subject of a heated debate, prompted by nearby Warner Studios’ bid to move the bar. Neighbors, regulars, and other supporters protested the proposed move, which has been put on hold.  “They just wanted to move us two spaces over,” recalls Jung, who notes that the bar received historical landmark status in 1991

B.J., an independent video director overhears our conversation. He offers a compelling reason that the Formosa should stay open: “I’m alone trying to figure out what life is about. Your aloneness is like a fault. There is a compulsion to be a part of things.”

The Formosa, he says, is one of those places where one is supposed to be social. “I guess people do anything to not be lonely.”