If there had been more money in professional tennis in the early ’60s, Jon Douglas might have never become a Realtor. 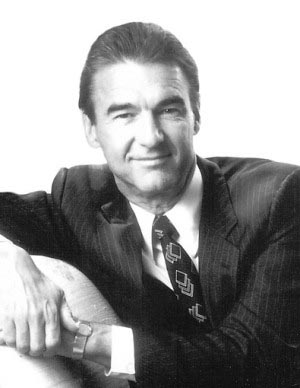 But in those days, tennis was not considered a serious vocation. Instead he opted for a professional career in real estate and an amateur career in tennis.
Starting as a beginning salesperson with the George Elkins Co. in 1963, Douglas sold a house on his first day there and made a $500 commission.
“It seemed to me that it was the kind of business where you got paid for the amount of ability you had and the amount of effort you put into it, and that’s what I was looking for,” Douglas said.

Today, Douglas has 27 sales offices and 10 divisions throughout the Westside, Hollywood and San Fernando Valley selling more than $8 million of properties per day.
He likes selling homes to the rich and famous and hobnobbing with members of the entertainment industry. In fact, his publicity director calls him an older, physical-version of actor Mark Harmon.

Born in Hot Springs, Arkansas, the 51-year-ago Douglas was the only child of an Army officer-sales manager and his wife. In true Army fashion, he recalled that they moved around a lot. When his father was shipped overseas, Douglas and his mother went to live with a family friend in Pacific Palisades. “I was about 8 and we lived there a couple of years, then we moved to Santa Monica when I was about 10 and I lived there for the rest of my growing up years,” Douglas said.

During those years he excelled in athletics, especially tennis. He was also on the high school football team at Roosevelt High School, where they won a California Interscholastic Federation football championship in 1952 and 1953

“To name something that gave me a rush, winning that championship gave me a rush,” he said. The win was special to Douglas who had a need to compete and win. “I am extremely competitive, I don’t know where that comes from,” he said.

He said that his family encouraged him to get involved in athletics, but they did not push him toward the business career he would later be so successful at. “It (his home life) wasn’t a business environment,” he said.

After graduating from high school, Douglas accepted a football scholarship to Stanford. But life on a football scholarship wasn’t what Douglas expected because the school was not giving any spending money to its athletes. “I didn’t have a car, I didn’t have any money, generally speaking I was kind of lost,” he said.
He was also troubled by the intellectual level of the school. “I was scared to death, several of the guys in the dorm with me were prep school graduates and I really hadn’t studied that hard so I was a bit intimidated,” he said.

That intimidation made him study harder for his classes. His work paid off: Douglas was awarded an academic scholarship at the end of that’ semester.
After graduation in 1958, Douglas applied and was accepted to law school but never got there. Instead he started playing more tennis. “I started to play tennis again in my last quarters of college. I decided to play the Caribbean circuit,” he said.

Douglas played in the Caribbean and eventually made the Davis Cup team in 1962. He played for another year and then joined the Marines. When he got out he played more tennis, got a job and quit, then reapplied to law school (but never went) and eventually found himself four years out of school without a career focus. He also got married.

“l had gotten married but I was still basically laying around the house, drinking beer,” he said. When he finally decided upon the real estate field as a possible career, Douglas found that he had no preparation. But he did take a few classes in real estate finance at UCLA.

“It was really a freak, no background, no interest, before I was introduced to it, but I realized it was a chance for a person to be successful.”
While working for George Elkins, Douglas eventually managed the Brentwood office. Later, he went into a partnership with Elkin’s son, George Elkins Jr. “We opened a division called the investment services division, and we syndicated investment projects as developers,” Douglas recalled.

Three months after this joint venture began, George Elkins Jr. was killed in an automobile accident. Douglas continued with the business on his own for two years, then started developing office buildings on the Westside. He eventually took on a new partner.

Dan Emmett and Douglas had three things in common: both were Stanford graduates and shared an interest in real estate. Emmett was also a graduate of Harvard Law School. They also formed a real estate development company called Douglas-Emmett in 1971. “I think he brought the same kind of energy to real estate that he had in athletics and in his first year in real estate, he (Douglas) made more money as a broker than most people will ever make,” Emmelt said.

In 1973, Douglas let Emmett run the company by himself while he proceeded to open the residential real estate company of Jon Douglas. Emmett who runs the company today, said, “It’s been a pleasant relationship, you’d expect more arguments out of a 17-year relationship.”

But Douglas didn’t stop there. “About a year after I started that, a guy named Tim Corliss came to me and said why don’t we become partners because he thought the brokerage business was going in a direction in which larger companies would start taking over (with) customers demanding more services from larger companies,” Douglas said. Consequently, Douglas and Corliss merged another Westside broker, the late Leilah Pearson into a larger residential real estate company.

“We never really put down a plan of what we would do,” said Corliss of the venture and eventual split-up.  The teaming was, in the words of Douglas, successful. But after a couple of years he decided to work alone. He began The Jon Douglas Co. in 1975.

Things were going well until the real estate crunch of 1980, where real estate interest rates rose to 18 percent, making it difficult for buyers to purchase homes.

“When 1980 came around, it was crunch time, I mean it was tough. My problem was exacerbated because I also had this development company in which we owned or operated offices that were new and not generating cash flow,’ Douglas said.

To remedy this, Douglas borrowed against the equity of his older properties to keep his brokerage in operation. He also used this money to buy or rent smaller real estate brokerages, which he used for office usage. In turn, he promised these brokerages future cash flow generated by his company.

“It doesn’t take a Rhodes scholar to know that when you’re in a down market, you buy instead of close, you just have to have the money to do so,” he said.  Douglas said when the market came back up in late 1982 the company became more profitable.

“We really got in and started to refine and re-think the kind of services we had to offer our customers. We really got into fundamentals, we were fighting for a larger market share,” he said.

The strategy he used is one that Douglas said he teaches to his salespeople. Douglas said a Realtor needs to examine the business. “The business is about service, and then they should prepare themselves to offer that service to the customer,” he said.

While he admitted that trying to apply this strategy to a large network of offices is difficult, Douglas said he believed real estate is a viable industry in which anyone can survive. “We are selling a product that everybody in the world wants. Southern California real estate is probably the finest real estate in the world,’ he said.