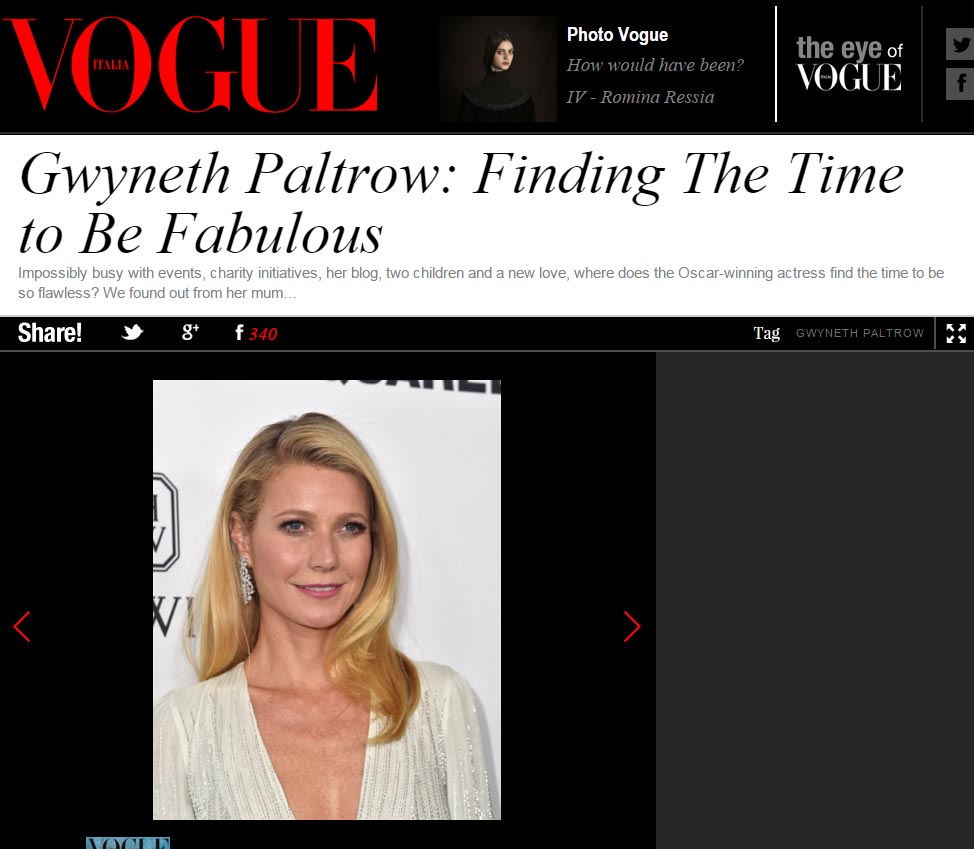 October has been the month for the Oscar-winning actress to make Hollywood event appearances. She started on the 9th as one of the honorees at Variety’s Power of Women event in a Brandon Maxwell cream white pencil skirt and blouse. She then appeared at the La Mer Skin Care 50th Anniversary on October 13th at Siren Studios in Hollywood (and earlier that day, Paltrow wore a sheer sleeveless white blouse and matching lace-tiered skirt to a tea at Craig’s restaurant for mom Blythe Danner) in a sleek blue jumpsuit by Galvan.

On October 20th, she supported filmmaker friend, Alexandra Shiva at the How to Dance in Ohio premiere in a black and blue lace dress set off by black Nicholas Kirkwood pumps. On October 24th she was honored with the Green Parent Award at the Environmental Media Awards (EMAs).  Paltrow wore a light green, cut out dress by Cushnie et Ochs and Jimmy Choo strappy sandals and while accepting her award jokingly asked the audience if her breasts were “still in here?.”

Two days later she was again honored as a Hollywood Style Icon at the first annual In Style magazine awards. This time she wore a classic navy blue gown by Schiaparelli. On October 29th she hosted the AmFar (The Foundation for Aids Research) Inspiration Gala.

When not on the red carpet, Paltrow is working more with charities such at LA Kitchen, a practice kitchen and restaurant in Los Angeles that teaches beginning chefs from low income families. In addition to ‘Kitchen’, she also supports the American Cancer Society, Entertainment Industry Foundation, Charlize Theron African Outreach Project, Healthy Child, Healthy World, Stand Up to Cancer, The Food Bank of New York City and various breast cancer charities. She is the creator of Goop, the popular, aspirational and sometimes controversial online lifestyle shopping site targeted to upscale women. She is also reportedly an investor in several ventures including that of fitness trainer Tracey Anderson. She also shares joint custody of her children Apple, nine and Moses, eight, from her marriage to Coldplay lead singer, Chris Martin.

Now that both she and Martin have moved onto other partners, she also has a new romance with American Horror Story and Scream Queens co-creator Brad Falchuck. While the two have been seen together in public, it is obviously when time allows. Falchuck accompanied Paltrow to the Variety Power of Women event. She accompanied him to his Scream Queens premiere on Sept. 2lst.  However, she brought her mom, actress Blythe Danner as her date to the EMA event.

Where does she find all the time?

“She can multi-task better than anyone I’ve ever met,” explains Danner.  “She is somehow able to do it and she has a good influence over her children.”