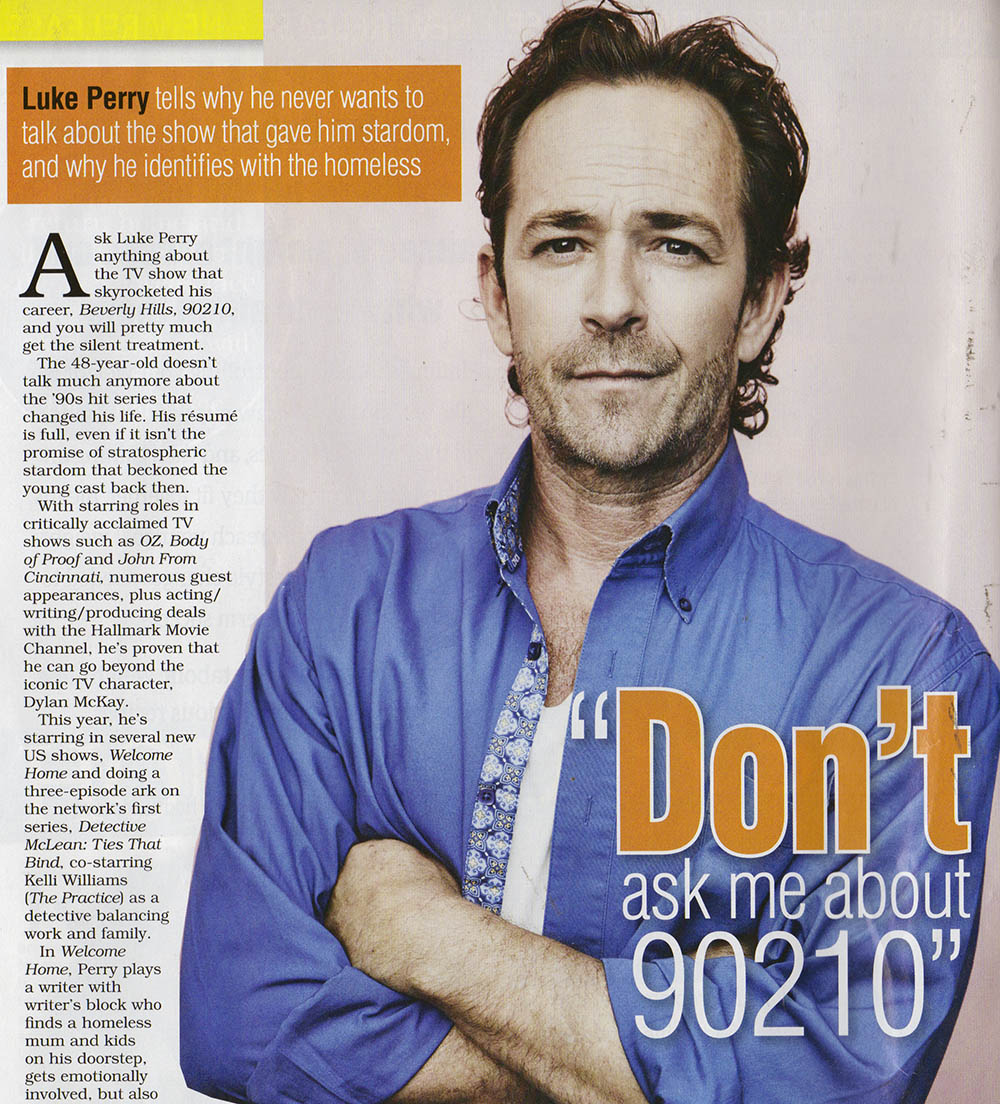 Ask Luke Perry anything about the TV show that skyrocketed his career, Beverly Hills, 90210, and you will pretty much get the silent treatment.

The 48-year-old doesn’t talk much anymore about the ’90s hit series that changed his life. His résumé is full, even if it isn’t the promise of stratospheric stardom that beckoned the young cast back then.

With starring roles in critically acclaimed TV shows such as OZ, Body of Proof and John From Cincinnati, numerous guest appearances, plus acting/ writing/ producing deals with the Hallmark Movie Channel, he’s proven that he can go beyond the iconic TV character, Dylan McKay.

This year, he’s starring in several new US shows, Welcome Home and doing a three-episode ark on the network’s first series, Detective McLean: Ties That Bind, co-starring Kelli Williams (The Practice) as a detective balancing work and family.

In Welcome Home, Perry plays a writer with writer’s block who finds a homeless mum and kids on his doorstep, gets emotionally involved, but also sees the opportunity as a writer to exploit them.

Drama ensues. Perry, still good-looking with just the right amount of lived-in features, is laid- back and laconic about most things, including his career, but get him in the room and he soon makes it clear he is resolute about his TV past.

What do you think about the recent unauthorized version of 90210

Why does that part of your life not matter anymore?

[It’s like] third grade. It’s just not relevant to anything I am doing.

Is doing [Welcome Home] a good way to remind people that homeless people are human, that there is a life story behind it?

Is it a good way? I hope so. Is it an effective way? I hope so, but do I know, I don’t know? I see the same cardboard signs you see and sometimes at stoplights and sometimes you see the guy who writes the funny sign and hopes his sense of humor will appeal to you, again, that was thought up by a human being. They are hungry or homeless. They try to show you humanity.

When you get to a point in society where you don’t have a house, clothes or a car, you still have love. You have love in your heart. When you take that away from people then we are really creating a problem. If you can’t give them hope, then you can give them love and let them know that we are willing to receive love if they want to give it.

Do you ever think that because of your celebrity status, they are trying no take advantage?

No, I don’t think about it because many times when you sit down and talk to people on the streets, they don’t know who you are. They don’t care who you are, even when they do know, they don’t care because their needs are so immediate. The thing they care about is getting out of the rain, getting some place to sleep. They will take that from anybody. Celebrity has value. We’re all equal. We’re all human beings.

Have you always had this realization?

I feel fortunate. There have been times in my life where I was practically homeless and I didn’t have a place to stay and it was only through the generosity of other people that I was able to make it and be okay. I’ve been pretty fortunate. This town’s been pretty good to me but as fortunate as I get, I never want to forget there are those left stranded.

Two days ago I heard Ben Kingsley talking on a podcast about the importance of telling stories and how they affect people’s lives and they affect change in the world and I forget that. I really do.

I’ve been doing this so long that it’s just another show but if you tell the right story to the right person at the right time and you will change the world. People still do it. And, it’s the only tool I have, the words, if I can do it, then it’s worthwhile.

Do you see yourself producing more and is there a responsibility to tell better stories?

I didn’t come to Hollywood to be a producer. It just didn’t occur to me. I find myself producing (shows like Jeremiah) to give myself good parts to play.