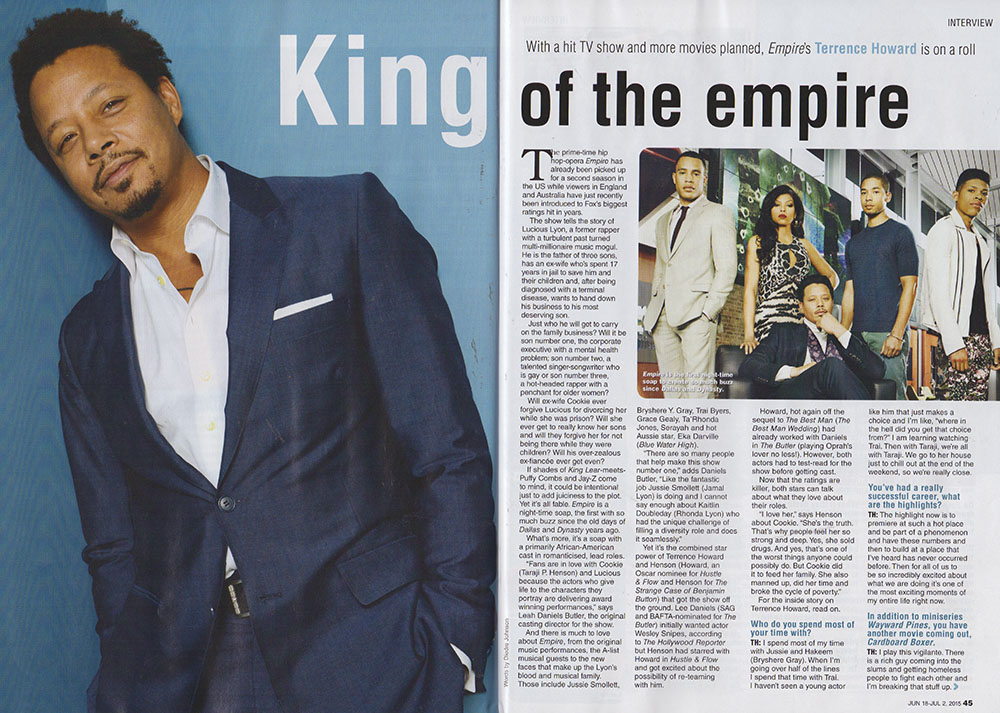 The prime-time hip hop-opera Empire has already been picked up for a second season in the US while viewers in England and Australia have just recently been introduced to Fox’s biggest ratings hit in years.

The show tells the story of Lucious Lyon, a former rapper with a turbulent past turned multi-millionaire music mogul. He is the father of three sons, has an ex-wife who’s spent 17 years in jail to save him and their children and, after being diagnosed with a terminal disease, wants to hand down his business to his most deserving son.

Just who he will get to carry on the family business? Will it be son number one, the corporate executive with a mental health problem; son number two, a talented singer-songwriter who is gay or son number three, a hot-headed rapper with a penchant for older women?

Will ex-wife Cookie ever forgive Lucious for divorcing her while she was prison? Will she ever get to really know her sons and will they forgive her for not being there while they were children? Will his over-zealous ex-fiancée ever get even?

If shades of King Lear-meets- Puffy Combs and Jay-Z come to mind, it could be intentional just to add juiciness to the plot. Yet it’s all fable. Empire is a night-time soap, the first with so much buzz since the old days of Dallas and Dynasty years ago.

“Fans are in love with Cookie (Taraji P. Henson) and Lucious because the actors who give life to the characters they portray are delivering award winning performances,” says Leah Daniels Butler, the original casting director for the show.

And there is much to love about Empire, from the original music performances, the A-list musical guests to the new faces that make up the Lyon’s blood and musical family.

“There are so many people that help make this show number one,” adds Daniels Butler, “Like the fantastic job Jussie Smollett (Jamal Lyon) is doing and I cannot say enough about Kaitlin Doubleday (Rhonda Lyon) who had the unique challenge of filling a diversity role and does it seamlessly.”

Yet it’s the combined star power of Terrence Howard and Henson (Howard, an Oscar nominee for Hustle & Flow and Henson for The Strange Case of Benjamin Button) that got the show off the ground. Lee Daniels (SAG and BAFTA-nominated for The Butler) initially wanted actor Wesley Snipes, according to The Hollywood Reporter but Henson had starred with Howard in Hustle & Flow and got excited about the possibility of re-teaming with him.

Howard, hot again off the sequel to The Best Man (The Best Man Wedding) had already worked with Daniels in The Butler (playing Oprah’s lover no less!). However, both actors had to test-read for the show before getting cast.

Now that the ratings are killer, both stars can talk about what they love about their roles.

“l love her,” says Henson about Cookie. “She’s the truth. That’s why people feel her so strong and deep. Yes, she sold drugs. And yes, that’s one of the worst things anyone could possibly do. But Cookie did it to feed her family. She also manned up, did her time and broke the cycle of poverty.”

For the inside story on Terrence Howard, read on.

Who do you spend most of your time with?

TH: I spend most of my time with Jussie and Hakeem (Bryshere Gray). When I’m going over half of the lines I spend that time with Trai. I haven’t seen a young actor like him that just makes a choice and I’m like, “where in the hell did you get that choice from?” I am learning watching Trai. Then with Taraji, we’re all with Taraji. We go to her house just to chill out at the end of the weekend, so we’re really close.

You’ve had a really successful career, what are the highlights?

TH: The highlight now is to premiere at such a hot place and be part of a phenomenon and have these numbers and then to build at a place that I’ve heard has never occurred before. Then for all of us to be so incredibly excited about what we are doing it’s one of the most exciting moments of my entire life right now. In addition to miniseries Wayward Pines, you have another movie coming out, Cardboard Boxer.

TH: I play this vigilante. There is a rich guy coming into the slums and getting homeless people to fight each other and I’m breaking that stuff up.

Did you initially do Wayward Pines and Empire at the same time?

TH: I was doing Wayward Pines when I was offered Empire.

I love Wayward Pines because I love Melissa Leo and I love M. Night Shyamalan. I always wanted to work with him. So the things that we were able to create in that futuristic, strange world, to play this cop who is good but seen in a bad way, was wonderful.

On Empire I read you guys drop and do push-ups after the scenes.

TH: After every one.

TH: Because I was fat and they were going to fire me (laughs).

No, the crew got together for this cat named Fuzz in lighting (on set). We were all going to do them for him, so in every scene we just dropped and did 10 push-ups. Now some of us are up to doing 80 or 90 with each one and at the end of every scene we do push- ups and it’s like this gathering thing, whether we work 14 hours, and we get energy after every scene and we go out and attack the next scene.

Doesn’t this exhaust you?

TH: It’s exhausting but it also kind of invigorates you and everybody gets involved in it.

Are your kids fans of Empire?

Any actors in the bunch?

TH: My youngest daughter was acting with me but she’s not doing it anymore.

What if they decided they wanted to follow you?

TH: I would be scared to death of them following me into this business because everyone thinks they are just going to come in and have a little piece of it and then they’re going to walk away and you never really get to that carrot.

Are you excited about becoming a daddy for the fourth time?

TH: Yeah, I feel like I’m becoming a dad for the first time because I feel mature now. I know how to deal with the expectations that come with being a father.

When is the baby due?

TH: Sometime in May.

The show is set in New York but filmed in Chicago. Do you think it could have been set in Chicago?

TH: I do, because Chicago is a bustling city. I wish we could use some of the landscape in establishing shots of Chicago because you don’t see that any place in the world and it was really the first big, big city in America. Before New York was a big city, Chicago was a big city and I wish we could take Empire to Chicago and use the outside shots.

What do you do in your downtime in Chicago?

TH: Most of the time writing music, like me and Jussie spent the last two days in the studio creating songs.

TH: Presentation is everything to Lucious but for me you only get one chance to make a first impression, no matter how many times that’s been used.

I never felt I had the opportunity to be a rock star but today I feel like a rock star. I have a hit show.