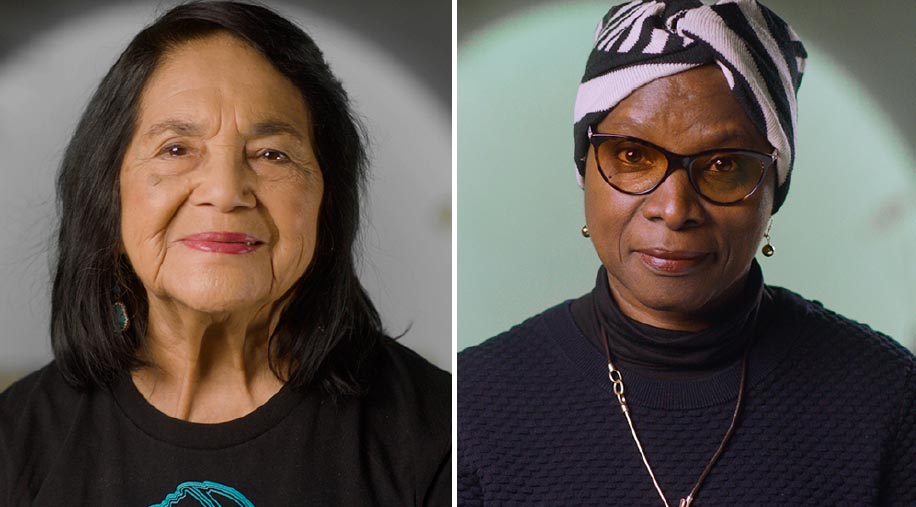 Dolores Huerta and Angélique Kidjo have close to a century of experience between them raising their voices to demand human rights.

They come from different backgrounds — Huerta is a longtime labor activist and civil rights leader who grew up in California; Kidjo is a singer-songwriter from Benin who has devoted her time to advancing children’s rights, women’s rights and women’s empowerment — and Huerta is a generation older. But when it comes to the importance of education in empowering people, their goals are often the same.

As part of Salesforce’s “Make Change” video series, each woman shared how their respective platforms have allowed them to not only educate but also amplify the voices of those not so easily heard, and, as Huerta says, put “civility, trust, truth, integrity, empathy, compassion and listening” into that education.

Kidjo is a Grammy-winning recording artist and one of the premier figures in African music. She has received dozens of accolades and awards, both for her music and her activism. She is the founder of the Batonga Foundation, created to educate and empower young girls in Kidjo’s home country in West Africa.

“I believe deeply that to make profound change everywhere, we need to educate people,” she says.

The 90-year-old Huerta’s life work has been to empower the powerless. She has worked with civil rights, women’s rights and empowerment organizations for decades. She is a recipient of the Presidential Medal of Freedom among other honors and is currently president of the Dolores Huerta Foundation, a nonprofit organization devoted to organizing communities and developing community leaders. Her work has led her to see empowerment itself as a form of education.

Kidjo, too, says empowering others means staying aware of someone else’s needs within your own community, city, state or country.

“If you cannot help others, then we do not have a society,” says Kidjo. “We’ve got to be aware of people around us. We might disagree, but as long as we continue the dialogue, talking to one another, we’re going to be safe.”

Feeling safe can be more difficult in these times as the world tries to fight off a potentially deadly virus, alleviate racial tension and stave off a possible economic depression.

But Kidjo says the privileged sometimes focus on the wrong kinds of wealth.

“The wealth that we have as a human being is not money, it’s our community,” she says. “It’s how we live together. That’s what all the things I’m doing are informed from. I believe in justice. I believe in what is fair, is fair.”

Kidjo also points out that education works both ways. People must learn as they teach.

She says: “If someone tells you something, can you double-check? Don’t just be somebody that absorbs information; find the roots of that information. If we don’t question ourselves a lot, then we are not human beings. Because living is learning every second, every minute.”

Huerta calls on the private sector to play a part in leading change in these turbulent times.

She stresses that action is key and that all businesses, corporations and public agencies should do their part to end racism, oppression and inequality.

“Anyone who has any semblance of power in our society, they should take action,” says Huerta. “Business leaders can also put more emphasis on their employees’ welfare. [They] should always see that their people that are in their organizations, their employees, that they are partners in the businesses that they have.”

Huerta is adamant that those who go into communities must not leave without creating more leaders. The best leaders are those who empower others and help them develop leadership skills.

Kidjo breaks it down simply in her own take on the Golden Rule: “If everybody’s a human being equal to you, then what you do for yourself that makes you good, you have to share it with people.”