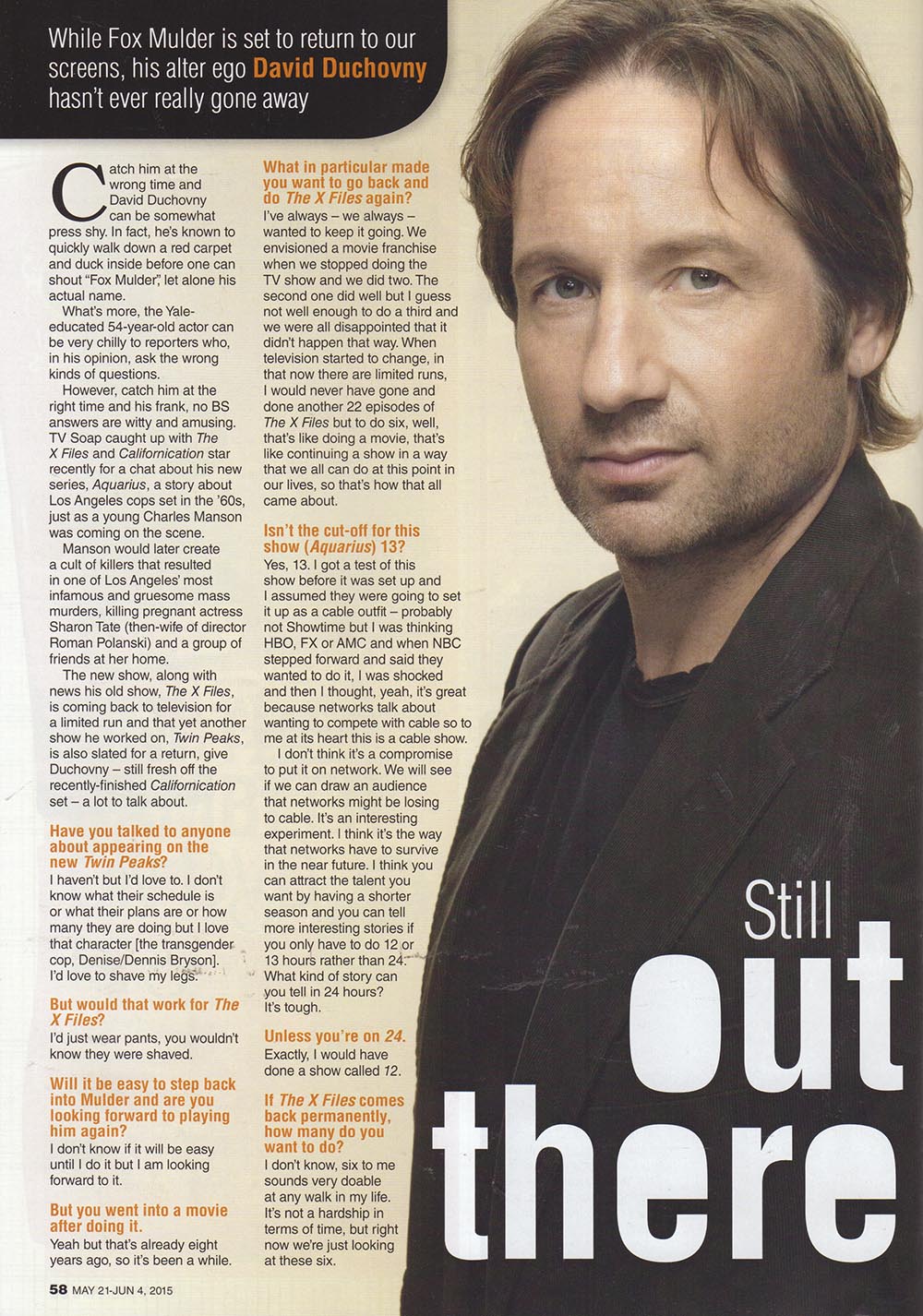 While Fox Mulder is set to return to our screens, his alter ego David Duchovny hasn’t ever really gone away

Catch him at the wrong time and David Duchovny can be somewhat press shy. In fact, he’s known to quickly walk down a red carpet and duck inside before one can shout “Fox Mulder’,’ let alone his actual name.

What’s more, the Yale- educated 54-year-old actor can be very chilly to reporters who, in his opinion, ask the wrong kinds of questions.

However, catch him at the right time and his frank, no BS answers are witty and amusing. TV Soap caught up with The X Files and Californication star recently for a chat about his new series, Aquarius, a story about Los Angeles cops set in the ’60s, just as a young Charles Manson was coming on the scene.

Manson would later create a cult of killers that resulted in one of Los Angeles’ most infamous and gruesome mass murders, killing pregnant actress Sharon Tate (then-wife of director Roman Polanski) and a group of friends at her home.

The new show, along with news his old show, The X Files, is coming back to television for a limited run and that yet another show he worked on, Twin Peaks, is also slated for a return, give Duchovny — still fresh off the recently-finished Californication set — a lot to talk about.

Have you talked to anyone about appearing on the new Twin Peaks?

I haven’t but I’d love to. I don’t know what their schedule is or what their plans are or how many they are doing but I love that character [the transgender cop, Denise/Dennis Bryson]. I’d love to shave my legs.

But would that work for The X Files?

I’d just wear pants, you wouldn’t know they were shaved.

Will it be easy to step back into Mulder and are you looking forward to playing him again?

I don’t know if it will be easy until I do it but I am looking forward to it.

But you went into a movie after doing it.

Yeah but that’s already eight years ago, so it’s been a while.

What in particular made you want to go back and do The X Files again?

I’ve always — we always — wanted to keep it going. We envisioned movie franchise when we stopped doing the TV show and we did two. The second one did well but I guess not well enough to do a third and we were all disappointed that it didn’t happen that way. When television started to change, in that now there are limited runs, I would never have gone and done another 22 episodes of The X Files but to do six, well, that’s like doing a movie, that’s like continuing a show in a way that we all can do at this point in our lives, so that’s how that all came about.

Yes, 13. I got a test of this show before it was set up and I assumed they were going to set it up as a cable outfit — probably not Showtime but I was thinking HBO, FX or AMC and when NBC stepped forward and said they wanted to do it, I was shocked and then I thought, yeah, it’s great because networks talk about wanting to compete with cable so to me at its heart this is a cable show.

I don’t think it’s a compromise to put it on network. We will see if we can draw an audience that networks might be losing to cable. It’s an interesting experiment. I think it’s the way that networks have to survive in the near future. I think you can attract the talent you want by having a shorter season and you can tell more interesting stories if you only have to do 12 or 13 hours rather than 24. What kind of story can you tell in 24 hours?

Exactly, I would have done a show called 12.

If The X Files comes back permanently, how many do you want to do?

I don’t know, six to me sounds very doable at any walk in my life. It’s not a hardship in terms of time, but right now we’re just looking at these six.