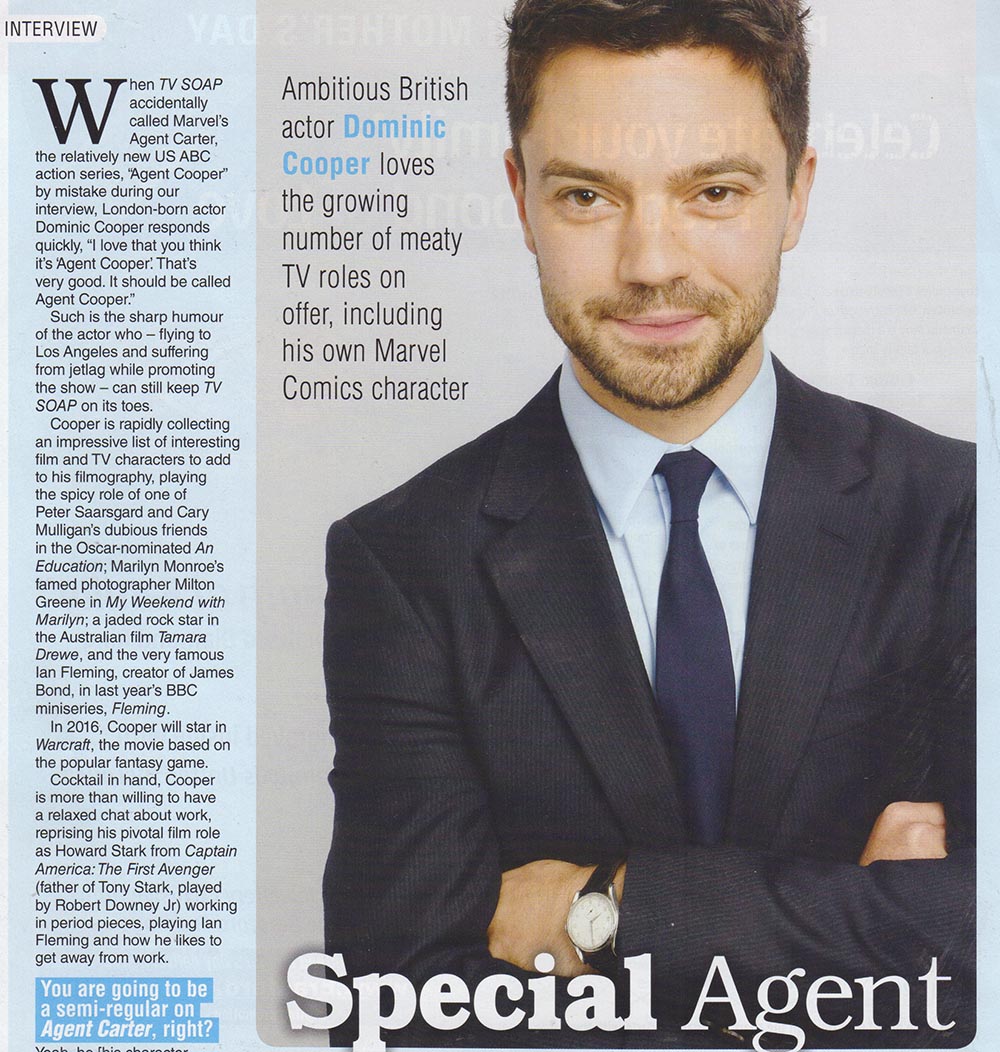 Such is the sharp humour of the actor who — flying to Los Angeles and suffering from jetlag while promoting the show — can still keep TV SOAP on its toes.

Cooper is rapidly collecting an impressive list of interesting film and TV characters to add to his filmography, playing the spicy role of one of Peter Saarsgard and Cary Mulligan’s dubious friends in the Oscar-nominated An Education; Marilyn Monroe’s famed photographer Milton Greene in My Weekend with Marilyn; a jaded rock star in the Australian film Tamara Drewe, and the very famous Ian Fleming, creator of James Bond, in last year’s BBC miniseries, Fleming.

In 2016, Cooper will star in Warcraft, the movie based on the popular fantasy game.

Cocktail in hand, Cooper is more than willing to have a relaxed chat about work, reprising his pivotal film role as Howard Stark from Captain America: The First Avenger (father of Tony Stark, played by Robert Downey Jr) working in period pieces, playing Ian Fleming and how he likes to get away from work.

You are going to be a semi-regular on Agent Carter, right?

Yeah, he [his character, Howard Stark) comes in and he sort of creates the chaos. There is a lot of speculation about how genuine he is, so you are never quite sure what he is up to and what chaos he is causing. He’s such a fun character to play, especially with all those cool gadgets from the 1940s.

You played Ian Fleming in the 1940s so are you kind of used to that?

It’s a useful period, It’s something very romantic and very nostalgic about it. It’s been very special working on all these (film) lots in Los Angeles that have so much history. You see all these old sets and get excited about it. And, the lack of mobile phones is lovely in storytelling makes it much more dynamic,

Have you read many books from that time period?

Yeah, the Fleming ones. Yeah, it’s lovely going back. On one level, everyone’s writing about the same things, the human dilemma, nothing ever really changes, on the other level, you get what’s going on in the world and what is affecting people, but ultimately people are experiencing, on a human level, the same thing we do now.

Do you have time to watch “telly”as they call it?

Telly is so very different in England from telly in America, that I don’t know how to cope. There are so many channels here. In England, there are cable networks but we still have those four main channels.[In the US], I get so confused so

I love what is happening wit television at the moment and the opportunity for us as actor We get to really investigate characters. In a film you are prohibited by time.

Do you have time Do you work-out?

Well, I might be playing a boxer so I am doing a pretty stringent boxing regime.

Do you have a favourite holiday spot?

What do you do to relax?

I like sports to take my mind off things that I am always doing. My brain is constantly going. Mostly what we do is learn lines very quickly, so anything that is far removed from that, and far away from a camera and being in the publicity spotlight. TVS