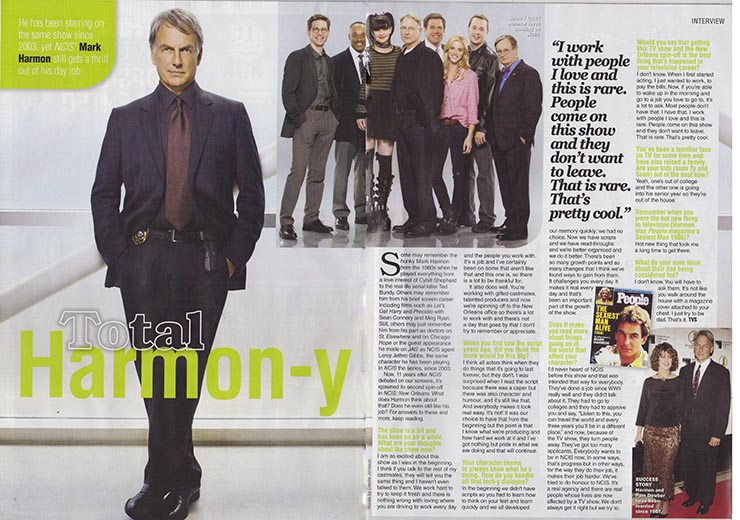 Some may remember the hunky Mark Harmon from the 1980s when he played everything from a love interest of Cybill Shepherd to the real-life serial killer Ted Bundy. Others may remember him from his brief screen career including films such as Let’s Get Harry and Presidio with Sean Connery and Meg Ryan. Still, others may just remember him from his part as doctors on St. Elsewhere and on Chicago Hope or the guest appearance he made on JAG as NCIS agent Leroy Jethro Gibbs, the same character he has been playing in NCIS the series, since 2003.

Now, 11 years after NC/S debuted on our screens, it’s spawned its second spin-off in NCIS: New Orleans. What does Harmon think about that? Does he even still like his job? For answers to these and more, keep reading.

The show is a hit and has been on air a while. What are your thoughts about the show now?

I am as excited about this show as I was in the beginning. I think if you talk to the rest of my cast mates, they will tell you the same thing and I haven’t even talked to them. We work hard to try to keep it fresh and there is nothing wrong with loving where you are driving to work every day and the people you work with. It’s a job and I’ve certainly been on some that aren’t like that and this one is, so there is a lot to be thankful for.

It also does well. You’re working with gifted cast mates, talented producers and now we’re spinning off to the New Orleans office so there’s a lot to work with and there’s not a day that goes by that I don’t try to remember or appreciate.

When you first saw the script years ago, did you think the show would be this big?

I think all actors think when they do things that it’s going to last forever, but they don’t. I was surprised when I read the script because there was a caper but there was also character and humor, and it’s still like that. And everybody makes it look real easy. It’s not! It was our choice to have that from the beginning but the point is that I know what we’re producing and how hard we work at it and I’ve got nothing but pride in what we are doing and that will continue.

Your character seems to always know what he’s doing. How do you handle all that tech-y dialogue?

In the beginning we didn’t have scripts so you had to learn how to think on your feet and learn quickly and we all developed our memory quickly; we had no choice. Now we have scripts and we have read-throughs and we’re better organized and we do it better. There’s been so many growth points and so many changes that I think we’ve found ways to gain from them. It challenges you every day. It makes it real every day and that’s been an important part of the growth of the show.

Does it make you read more about things going on in the world that affect your character?

I’d never heard of NCIS before this show and that was intended that way for everybody. They’ve done a job since WWII really well and they didn’t talk about it. They had to go to colleges and they had to approve you and say, “Listen to this, you can travel the world and every three years you’ll be in a different place,” and now, because of the TV show, they turn people away. They’ve got too many applicants. Everybody wants to be in NCIS now. In some ways, that’s progress but in other ways for the way they do their job, it makes their job harder. We’ve tried to do honor to NCIS. It’s a real agency and there are real people whose lives are now affected by a TV show. We don’t always get it right but we try to.

Would you say that getting this TV show and the New Orleans spin-off is the best thing that’s happened in your television career?

I don’t know. When I first started acting, I just wanted to work, to pay the bills. Now, if you’re able to wake up in the morning and go to a job you love to go to, it’s a lot to ask. Most people don’t have that. I have that. I work with people I love and this is rare. People come on this show and they don’t want to leave. That is rare. That’s pretty cool.   You’ve been a familiar face on TV for some time and have also raised a family.

Are your kids (sons Ty and Sean) out of the nest now?

Yeah, one’s out of college and the other one is going into his senior year so they’re out of the house.

Remember when you were the hot new thing in television (Harmon was People magazine’s Sexiest Man 1986)?

Hot new thing that took me a long time to get there. I don’t know. You will have to ask them. It’s not like you walk around the house with a magazine cover attached to your chest. I just try to be dad. That’s it.