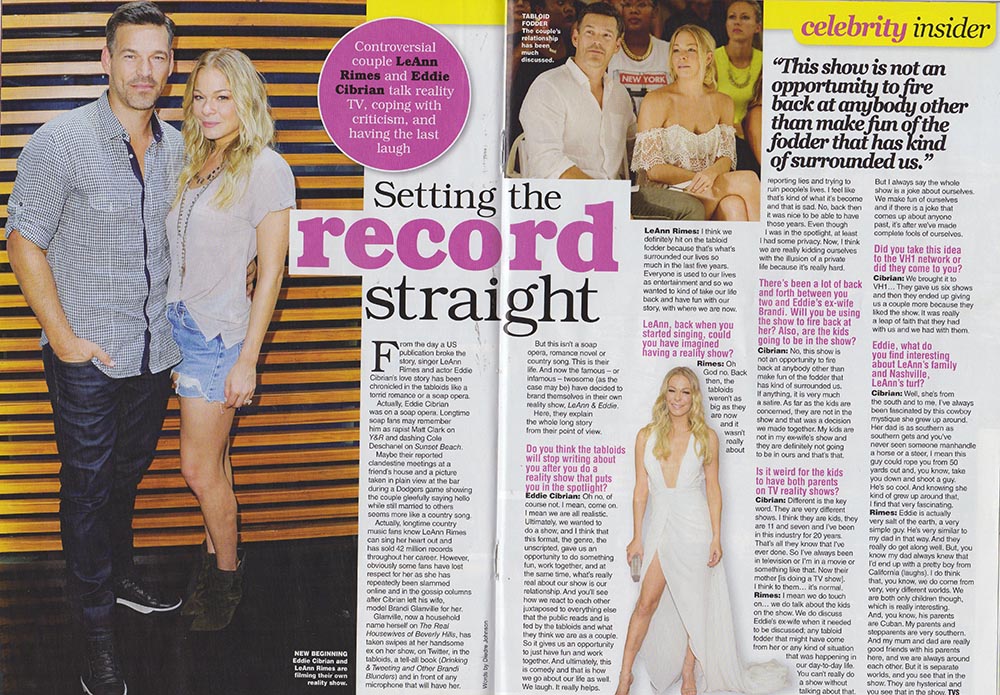 From the day a US publication broke the story, singer LeAnn Rimes and actor Eddie Cibrian’s love story has been chronicled in the tabloids like a torrid romance or a soap opera.

Actually, Eddie Cibrian was on a soap opera. Longtime soap fans may remember him as rapist Matt Clark on Y&R and dashing Cole Deschanel on Sunset Beach.

Maybe their reported clandestine meetings at a friend’s house and a picture taken in plain view at the bar during a Dodgers game showing the couple gleefully saying hello while still married to others seems more like a country song.

Actually, longtime country music fans know LeAnn Rimes can sing her heart out and has sold 42 million records throughout her career. However, obviously some fans have lost respect for her as she has repeatedly been slammed online and in the gossip columns after Cibrian left his wife, model Brandi Glanville for her.

Glanville, now a household name herself on The Real Housewives of Beverly Hills, has taken swipes at her handsome ex on her show, on Twitter, in the tabloids, a tell-all book (Drinking & Tweeting and Other Brandi Blunders) and in front of any microphone that will have her.

But this isn’t a soap opera, romance novel or country song. This is their life. And now the famous — or infamous — twosome (as the case may be) have decided to brand themselves in their own reality show, LeAnn & Eddie.

Here, they explain the whole long story from their point of view.

Do you think the tabloids will stop writing about you after you do a reality show that puts you in the spotlight?

Eddie Cibrian: Oh no, of course not. I mean, come on. I mean we are all realistic. Ultimately, we wanted to do a show, and I think that this format, the genre, the unscripted, gave us an opportunity to do something fun, work together, and at the same time, what’s really real about our show is our relationship. And you’ll see how we react to each other juxtaposed to everything else that the public reads and is fed by the tabloids and what they think we are as a couple. So it gives us an opportunity to just have fun and work together. And ultimately, this is comedy and that is how we go about our life as well. We laugh. It really helps.

LeAnn Rimes: I think we definitely hit on the tabloid fodder because that’s what’s surrounded our lives so much in the last five years. Everyone is used to our lives as entertainment and so we wanted to kind of take our life back and have fun with our story, with where we are now.

LeAnn, back when you started singing, could you have imagined having a reality show?

Rimes: Oh God no. Back then, the tabloids weren’t as are now and it wasn’t really about reporting lies and trying to ruin people’s lives. I feel like that’s kind of what it’s become and that is sad. No, back then it was nice to be able to have those years. Even though I was in the spotlight, at least I had some privacy. Now, I think we are really kidding ourselves with the illusion of a private life because it’s really hard.

There’s been a lot of back and forth between you two and Eddie’s ex-wife Brandi, Will you be using the show to fire back at her? Also, are the kids going to be in the show?

Cibrian: No, this show is not an opportunity to fire back at anybody other than make fun of the fodder that has kind of surrounded us. If anything, it is very much a satire. As far as the kids are concerned, they are not in the show and that was a decision we made together. My kids are not in my ex-wife’s show and they are definitely not going to be in ours and that’s that.

Is it weird for the kids to have both parents on TV reality shows?

Cibrian: Different is the key word. They are very different shows. I think they are kids, they are 11 and seven and I’ve been in this industry for 20 years. That’s all they know that I’ve ever done. So I’ve always been in television or I’m in a movie or something like that. Now their mother Lis doing a TV show). I think to them… it’s normal.

Rimes: I mean we do touch on… we do talk about the kids on the show. We do discuss Eddie’s ex-wife when it needed to be discussed; any tabloid fodder that might have come from her or any kind of situation that was happening in our day-to-day life. You can’t really do a show without talking about that. But I always say the whole show is a joke about ourselves. We make fun of ourselves and if there is a joke that comes up about anyone past, it’s after we’ve made complete fools of ourselves.

Did you take this idea to the VHI network or did they come to you?

Cibrian: We brought it to VHI … They gave us six shows and then they ended up giving us a couple more because they liked the show. It was really a leap of faith that they had with us and we had with them.

Eddie, what do you find interesting about LeAnn’s family and Nashville, LeAnn’s turf?

Cibrian: Well, she’s from the south and to me, I’ve always been fascinated by this cowboy mystique she grew up around. Her dad is as southern as southern gets and you’ve never seen someone manhandle a horse or a steer, I mean this guy could rope you from 50 yards out and, you know, take you down and shoot a guy. He’s so cool. And knowing she kind of grew up around that, I find that very fascinating.

Rimes: Eddie is actually very salt of the earth, a very simple guy. He’s very similar to my dad in that way. And they really do get along well. But, you know my dad always knew that I’d end up with a pretty boy from California (laughs). I do think that, you know, we do come from very, very different worlds. We are both only children though, which is really interesting. And, you know, his parents are Cuban. My parents and stepparents are very southern. And my mum and dad are really good friends with his parents here, and we are always around each other. But it is separate worlds, and you see that in the show. They are hysterical and you see that in the show. TVS