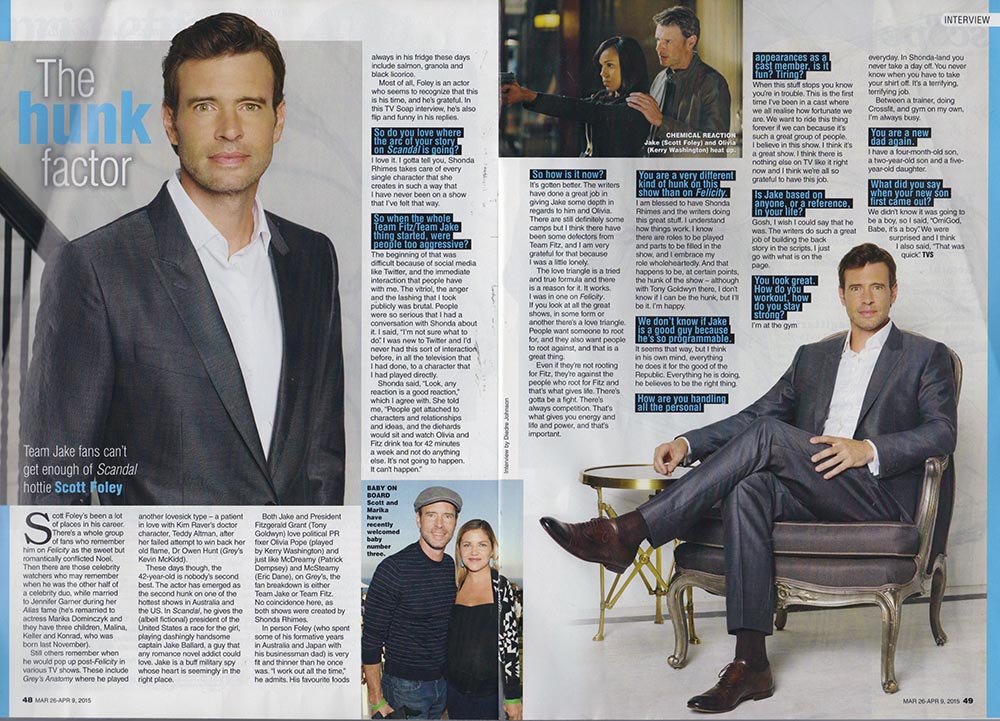 Story By Diedre Johnson
Scott Foley’s been a lot of places in his career. There’s a whole group of fans who remember him on Felicity as the sweet but romantically conflicted Noel. Then there are those celebrity watchers who may remember when he was the other half of a celebrity duo, while married to Jennifer Garner during her Alias fame (he’s remarried to actress Marika Dominczyk and they have three children, Malina, Keller and Konrad, who was born last November).
Still others remember when he would pop up post-Felicity in various TV shows. These include Grey’s Anatomy where he played another lovesick type — a patient in love with Kim Raver’s doctor character, Teddy Altman, after her failed attempt to win back her old flame, Dr Owen Hunt (Grey’s Kevin McKidd).
These days though, the 42-year-old is nobody’s second best. The actor has emerged as the second hunk on one of the hottest shows in Australia and the US. In Scandal, he gives the (albeit fictional) president of the United States a race for the girl, playing dashingly handsome captain Jake Ballard, a guy that any romance novel addict could love. Jake is a buff military spy whose heart is seemingly in the right place.
Both Jake and President Fitzgerald Grant (Tony Goldwyn) love political PR fixer Olivia Pope (played by Kerry Washington) and just like McDreamy (Patrick Dempsey) and McSteamy (Eric Dane), on Grey’s, the fan breakdown is either Team Jake or Team Fitz. No coincidence here, as both shows were created by Shonda Rhimes.
In person Foley (who spent some of his formative years in Australia and Japan with his businessman dad) is very fit and thinner than he once was. “l work out all the time,” he admits. His favorite foods always in his fridge these days include salmon, granola and black licorice.
Most of all, Foley is an actor who seems to recognize that this is his time, and he’s grateful. In this TV Soap interview, he’s also flip and funny in his replies.

So do you love where the arc of your story on Scandal is going?
I love it. I gotta tell you, Shonda Rhimes takes care of every single character that she creates in such a way that I have never been on a show that I’ve felt that way.

So when the whole Team Fitz/Team Jake thing started, were people too aggressive?
The beginning of that was difficult because of social media like Twitter, and the immediate interaction that people have with me. The vitriol, the anger and the lashing that I took publicly was brutal. People were so serious that I had a conversation with Shonda about it. I said, “I’m not sure what to do’.’ I was new to Twitter and I’d never had this sort of interaction before, in all the television that I had done, to a character that I had played directly

Shonda said, “Look, any reaction is a good reaction,” which I agree with. She told me, “People get attached to characters and relationships and ideas, and the diehards would sit and watch Olivia and Fitz drink tea for 42 minutes a week and not do anything else. It’s not going to happen. It can’t happen.”

So how is it now?
It’s gotten better. The writers have done a great job in giving Jake some depth in regards to him and Olivia. There are still definitely some camps but I think there have been some defectors from Team Fitz, and I am very grateful for that because I was a little lonely.
The love triangle is a tried and true formula and there is a reason for it. It works.
I was in one on Felicity. If you look at all the great shows, in some form or another there’s a love triangle. People want someone to root for, and they also want people to root against, and that is a great thing.
Even if they’re not rooting for Fitz, they’re against the people who root for Fitz and that’s what gives life. There’s gotta be a fight. There’s always competition. That’s what gives you energy and life and power, and that’s important.

You are a very different kind of hunk on this show than on Felicity.
I am blessed to have Shonda Rhimes and the writers doing this great stuff. I understand how things work. I know there are roles to be played and parts to be filled in the show, and I embrace my role wholeheartedly. And that happens to be, at certain points, the hunk of the show — although with Tony Goldwyn there, I don’t know if I can be the hunk, but I’ll be it. I’m happy.
We don’t know if Jake is a good guy because he’s so programmable.
It seems that way, but I think in his own mind, everything he does it for the good of the Republic. Everything he is doing, he believes to be the right thing.
How are you handling all the personal appearances as a cast member, is it fun? Tiring?
When this stuff stops you know you’re in trouble. This is the first time I’ve been in a cast where we all realize how fortunate we are. We want to ride this thing forever if we can because it’s such a great group of people. I believe in this show. I think it’s a great show. I think there is nothing else on TV like it right now and I think we’re all so grateful to have this job.
Is Jake based on anyone or a reference, in our life?
Gosh, I wish I could say that he was. The writers do such a great job of building the back
Story in the scripts. I just go with what is on the page.
You look great. How do you work out, how do you stay Strong?
I’m at the gym every day. In Shonda-land you never take a day off. You never know when you have to take your shirt off. It’s a terrifying, terrifying job.
Between a trainer, doing Crossfit, and gym on my own, I’m always busy.
You are a new dad again.
I have a four-month-old son, a two-year-old son and a five- year-old daughter.
What did you say when your new son first came out?
We didn’t know it was going to be a boy, so I said, ‘OmiGod, Babe, it’s a boy’.’ We were surprised and I think I also said, “That was quick’!