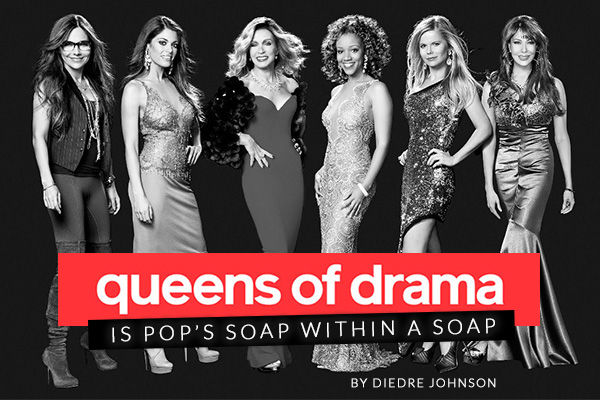 Queens of Drama  Is POP’s Soap Within A Soap

What happens when a bunch of daytime and nighttime actresses get together and try to create, pitch and produce their own “steamy” series for pilot season? What do you think, people? Gossipy, backstabbing, diva-ish behavior ensues, of course!
That’s to be expected from Pop’s new reality series, Queens of Drama. The show stars Donna Mills from Knot’s Landing, Vanessa Marcil from Las Vegas, General Hospital and Beverly Hills 90210, Hunter Tylo from The Bold and the Beautiful and daytime stars Lindsay Hartley (Passions, All My Children and Days of Our Lives), Chrystee Pharris (General Hospital, Passions) and Crystal Hunt (Guiding Light, One Life to Live).

Queen of drama cast The 10-episode show focuses on six actresses who’ve had their moment of acclaim but now find themselves with new career goals. Each wants just a little more than to be at the mercy of an audition, and together they set out to make a place for themselves. This is an evergreen, good concept if one can get past the sometimes over-staged scenes.
Barring that, ‘Queens’ appears to be just a bit of campy fun and a real glimpse into how a show really gets put together in Hollywood.
But Fade In, not everyone can be a leader, which proves a problem when the well-known Mills decides to head the project, leaving Marcil and the other actresses to question her motives.
In real life, it was Mills and Marcil, both with experience in primetime television, that were the first to be approached. Mills says initially, she didn’t want to do it. 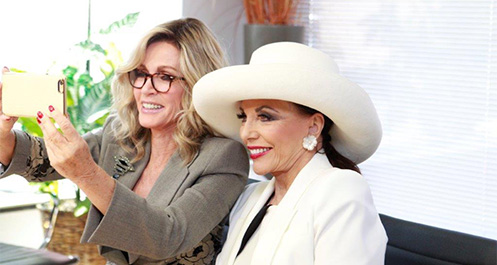 Mills and Marcil “They said listen to the pitch, so I did and what I heard was that it was a reality show that had a purpose. It had a goal to reach and that really interested me. I had produced and I liked the idea. I also like the idea that it was dealing with other women that would form their own production company and that’s what we did in the ten weeks– we were producing the show,” she says.
Marcil, a self-proclaimed reality show junkie who binge watches The Wahlburgers â”€ didn’t need a lot of convincing â”€ as she also knew the producers, Leslie Futura and Adam Freed (of Think Factory Media). “I didn’t know a lot about it but [Freed] just told me, `You’re going to come work for me, and I did because he’s funny. If you are funny, I will do anything for you.’”
Hunter Tylo, a long-time heroine on daytime’s long-running and very popular; The Bold and the Beautiful appears on the show as a friend and advocate of Mills. 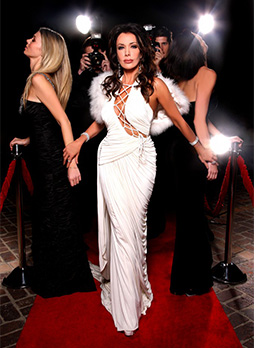 Marcil Tylo, who played the long-suffering (notice all these “longs”, lots of them in soap opera descriptions) Dr. Taylor Hayes Forrester for more than 20 years, has had her share of real-life tribulations. She left The Bold and the Beautiful in 2013 after reportedly not being able to renegotiate a suitable contract.
During the height of her popularity, she won a role on primetime’s (now legendary) Melrose Place, but was fired by Aaron Spelling before filming of the show began as she was pregnant at the time. The late Spelling argued that Tylo couldn’t play the role of a sexy femme fatale pregnant.

She sued Spelling for discrimination and won 4.8 million in a landmark 1998 court case.
In 2007 she lost her son, Michael, 19, to a drowning in her swimming pool. The coroner ruled the death accidental because of an epilepsy attack. Another of her children, daughter Katya, lost an eye during infancy to cancer, but has since fully recovered. Currently, she is married for the third time and a re-born Christian.
Hartley, Pharris and Hunt auditioned for their roles. For Pharris, the role is an answered prayer, literally.
“I prayed for having a reality soap show for about a year and I didn’t know how that was to come about,” the former Passions star recalls. “Then, out of the blue, I got this call and they said, ‘I want you to come in for a reality show.’”
The hope was that women could come together and “not have all the crazy stuff and get something accomplished.” Still, even dreams that come true are not without their problems. 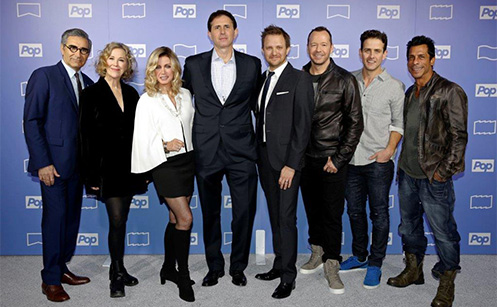 “When you have people in different positions that might have been in the business a little bit longer, sometimes you feel like they know better, but sometimes you have to stand your ground and know that you are right and that was probably a big lesson for me,” she says.
For Pharris, the show also represents a second chance to work in TV in Hollywood after a few years working on her own projects, including a one-woman show, in Atlanta.
“I’m super excited. Think Factory brought me in to do the project and then Pop is a brand new network I get to help create.”
Plus, she gets to work with her old Passions’ co-star, Lindsay Hartley, whom soap fans may remember as Teresa Lopez Fitzgerald, an immature ingénue, desperately seeking the affections of the show’s resident super hunk. A few years after Passions and Hartley is on the soap tread wheel, appearing in on-going roles on Days of Our Lives and later, the reincarnated web version of All My Children.
Prior to her role on the reality show, Hartley had been busy with guest roles and mothering her lovely ten-year-old daughter, Isabella, whose father is Revenge actor, Justin Hartley (Lindsay’s ex-husband). Ask the proud mom and she will eagerly show pictures. 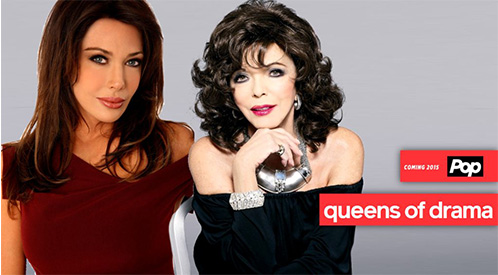 Mill and Marcil“I was very excited about the idea and about who was involved, and when Chrystee’s name came up, I thought, `Omigod, I worked with her on Passions’. I mean, that was such a long time ago.”
Hartley sees working on the show as a mix of emotions played out before the cameras. “I mean it hits everything. For the most part there’s a lot of realness. It’s very authentic.”
Dishmag.com wanted spoilers, but the only reveals are that there will be a lot of twists and turns on the road to an actual series– oh, and that actress Joan Collins, another soap legend, will put in some appearances.
“In every episode there is something; but when Joan Collins comes, that’s a surprise to most everybody on the show and it’s really a surprise, why she shows up,” says Mills. “There are a number of things we do,” she offers. “The women go on a retreat and things happen.”
So, the real question is: Do they have a show at the end?
“We can’t say, but that’s the goal,” says Marcil.