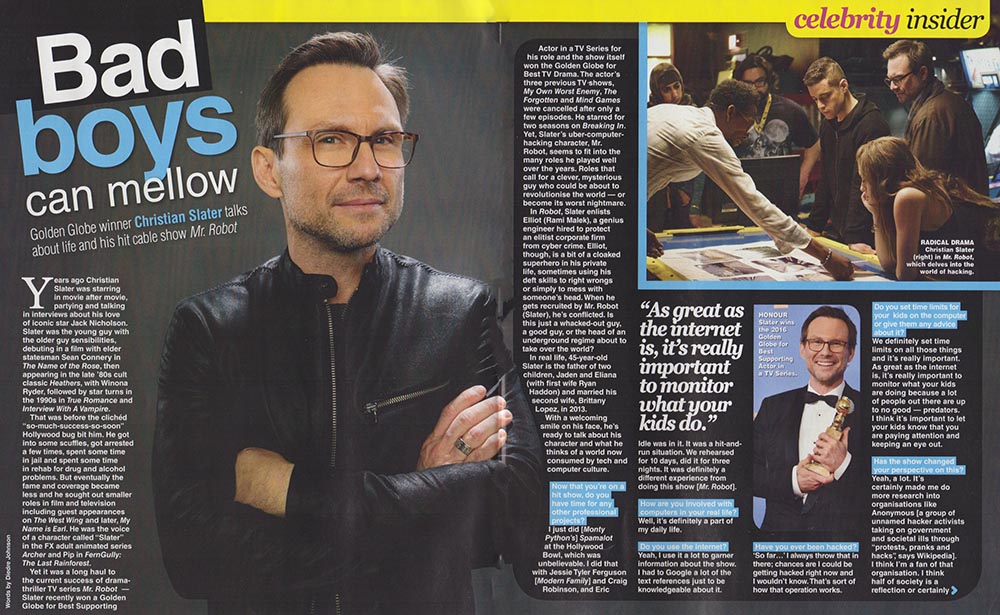 Years ago Christian Slater was starring in movie after movie, partying and talking in interviews about his love of iconic star Jack Nicholson. Slater was the young guy with the older guy sensibilities, debuting in a film with elder statesman Sean Connery in The Name of the Rose, then appearing in the late ’80s cult classic Heathers, with Winona Ryder, followed by star turns in the 1990s in True Romance and Interview With A Vampire.

That was before the clichéd ‘so-much-success-so-soon” Hollywood bug bit him. He got into some scuffles, got arrested a few times, spent some time in jail and spent some time in rehab for drug and alcohol problems. But eventually the fame and coverage became less and he sought out smaller roles in film and television including guest appearances on The West Wing and later, My Name is Earl. He was the voice of a character called “Slater” in the FX adult animated series Archer and Pip in FernGully: The Last Rainforest.

Yet it was a long haul to the current success of drama- thriller TV series Mr. Robot — Slater recently won a Golden Globe for Best Supporting Actor in a TV Series for his role and the show itself won the Golden Globe for Best TV Drama. The actor’s three previous TV-shows, My Own Worst Enemy, The Forgotten and Mind Games were cancelled after only a few episodes. He starred for two seasons on Breaking ln. Yet, Slater’s uber-computer- hacking character, Mr. Robot, seems to fit into the many roles he played well over the years. Roles that call for a clever, mysterious guy who could be about to revolutionize the world — or become its worst nightmare.

In Robot, Slater enlists Elliot (Rami Malek), a genius engineer hired to protect an elitist corporate firm from cyber crime. Elliot, though, is a bit of a cloaked superhero in his private life, sometimes using his deft skills to right wrongs or simply to mess with someone’s head. When he gets recruited by Mr. Robot (Slater), he’s conflicted. Is this just a whacked-out guy, a good guy, or the head of an underground regime about to take over the world?

In real life, 45-year-old Slater is the father of two children, Jaden and Eliana (with first wife Ryan Haddon) and married his second wife, Brittany Lopez, in 2013.

With a welcoming smile on his face, he’s ready to talk about his character and what he thinks of a world now consumed by tech and computer culture.

No that you’re on a hit show do you have time for any other projects?

I just did [Monty Python’s] Spamalot at the Hollywood Bowl, which was unbelievable. I did that with Jessie Tyler Ferguson [Modem Family] and Craig Robinson, and Eric Idle was in it. It was a hit-and- run situation. We rehearsed for 10 days, did it for three nights. It was definitely a different experience from doing this show [Mr. Robot].

How are you involved with computers in your real life?

Well, it’s definitely a part of my daily life.

Do you use the internet?

Yeah, I use it a lot to garner information about the show. I had to Google a lot of the text references just to be knowledgeable about it.

Have you ever been hacked?

‘So far…’ I always throw that in there; chances are I could be getting hacked right now and I wouldn’t know. That’s sort of how that operation works.

Do you set time limits for your kids on the computer or give them any advice about it?

Has the show changed your perspective on this?

Yeah, a lot. It’s certainly made me do more research into organizations like Anonymous [a group of unnamed hacker activists taking on government and societal ills through ‘protests, pranks and hacks’,’ says Wikipedia]. I think I’m a fan of that organization. I think half of society is a reflection or certainly deeply inspired by that organisation and it’s been interesting to delve into.

What’s the biggest lie on the internet about you?

Mr. Robot is scary for anybody who’s into computer/tech stuff.  Do you think this could ever rally happen?

What’s been interesting for me is that while we are making some of the episodes, a lot of the material that we’re dealing with is actually happening in the news. We’ll be filming something and then almost an identical scenario will happen, maybe not in America but in some other part of the world and Mr. Robot is just sort of a glimpse into what actually could occur.

You’re going into your second season.  What do you think is going to be the most different about your character?

There will definitely be more of his back story revealed. Sam [Esmail, the series creator and head writer] has got the whole thing mapped out and really wants to continue to delve more deeply into each character

Have you had people coming up to you, wanting to know more about the show?

Yeah, as the show has aired, it’s happening more and more, and yeah, it’s been very interesting. There’s been some stuff on YouTube where somebody filmed some scenes we were doing; whatever they posted was totally wrong.

So they filmed while you were taping the show?

Yeah, yeah, yeah. It’s hard [to prevent it] with these devices that we all have now.

Will being on the show turn you more into a bit of an activist, not at that level but more aware?

We’ll see where it goes. Right now, I’m an actor doing the show and raising my kids.

I think I am phenomenally grateful. I’m very happy.

Are you still a Jack Nicholson fan?

Oh, yeah. Always. I think until my dying day.  I’ll be a fan of Jack’s. He’s always the greatest and I have always admired his work forever.

You were compared to him in your early days.

I know. I was. I take it as a huge compliment. I think I was really going for that so I think, ‘Hey, I managed to pull it off somehow.’