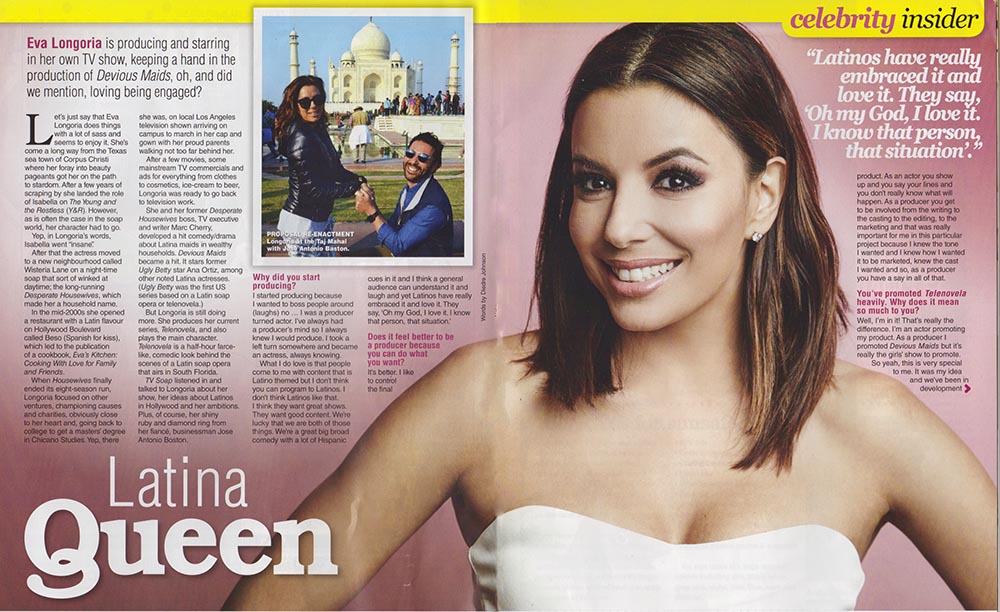 Eva Longoria is producing and starring in her own TV show, keeping a hand in the production of Devious Maids, oh, and did we mention, loving being engaged?

Let’s just say that Eva Longoria does things with a lot of sass and seems to enjoy it. She’s come a long way from the Texas sea town of Corpus Christi where her foray into beauty pageants got her on the path to stardom. After a few years of scraping by she landed the role of Isabella on The Young and the Restless (Y&R). However, as is often the case in the soap world, her character had to go.
Yep, in Longoria’s words, Isabella went “insane.’

After that the actress moved to a new neighborhood called Wisteria Lane on a night-time soap that sort of winked at daytime; the long-running Desperate Housewives, which made her a household name.
In the mid-2000s she opened a restaurant with a Latin flavor on Hollywood Boulevard called Beso (Spanish for kiss), which led to the publication of a cookbook, Eva’s Kitchen: Cooking With Love for Family and Friends.
When Housewives finally ended its eight-season run, Longoria focused on other ventures, championing causes and charities, obviously close to her heart and, going back to college to get a masters’ degree in Chicano Studies. Yep, there she was, on local Los Angeles television shown arriving on campus to march in her cap and gown with her proud parents walking not too far behind her.

After a few movies, some mainstream TV commercials and ads for everything from clothes to cosmetics, ice-cream to beer, Longoria was ready to go back to television work.
She and her former Desperate Housewives boss, TV executive and writer Marc Cherry, developed a hit comedy/drama about Latina maids in wealthy households. Devious Maids became a hit. It stars former Ugly Betty star Ana Ortiz, among other noted Latina actresses. (Ugly Betty was the first US series based on a Latin soap opera or telenovela.)

But Longoria is still doing more. She produces her current series, Telenovela, and also plays the main character. Telenovela is a half-hour farce- like, comedic look behind the scenes of a Latin soap opera that airs in South Florida.

TV Soap listened in and talked to Longoria about her show, her ideas about Latinos in Hollywood and her ambitions. Plus, of course, her shiny ruby and diamond ring from her fiancé, businessman Jose Antonio Boston.

Why did you start producing?

I started producing because I wanted to boss people around (laughs) no … I was a producer turned actor. I’ve always had a producer’s mind so I always knew I would produce. I took a left turn somewhere and became an actress, always knowing.

What I do love is that people come to me with content that is Latino themed but I don’t think you can program to Latinos. I don’t think Latinos like that. I think they want great shows. They want good content. We’re lucky that we are both of those things. Were a great big broad comedy with a lot of Hispanic cues in it and I think a general audience can understand it and laugh and yet Latinos have really embraced it and love it. They say, ‘Oh my God, I love it. I know that person, that situation.’

Does it feel better to be a producer because you can do what you want?

It’s better. I like to control the final product. As an actor you show up and you say your lines and you don’t really know what will happen. As a producer you get to be involved from the writing to the casting to the editing, to the marketing and that was really important for me in this particular project because I knew the tone I wanted and I knew how I wanted it to be marketed, knew the cast I wanted and so, as a producer you have a say in all of that.

You’ve promoted Telenovela heavily. Why does it mean so much to you?

Well, I’m in it! That’s really the difference. I’m an actor promoting my product. As a producer I promoted Devious Maids but it’s really the girls’ show to promote. So yeah, this is very special to me. It was my idea and we’ve been in development for over three years. It’s a very special, unique project that I wanted to make sure had a great launch and was super successful.

You’ve been in daytime, primetime and now you’re in a spoof of a soap opera. Is there a bit of you in all of them?

I don’t think so. I’ve never played ‘me’ because Isabella [on Y&R] was crazy. And then Gabriella [Desperate Housewives] was the opposite of me. Gabriella was narcissistic, egocentric, and then Ana Sofia [Telenovela] is actually insecure and a little vulnerable, and fragile. She tries to be strong and then hides behind Mimi [Diana Maria Riva], and I’m not that either so it’s been sort of fun to play things that are not me.

Love your ring; have you set a date yet?

How did you know that this could be different when you were dating your fiancé?

He was just really, really kind. He’s probably the kindest man I’ve ever met.
You and America Ferrera did that bit at the Golden Globes [when the pair hilariously drew attention to people who have a hard time distinguishing Latina actresses]. What kind of response did it get? America and I have been friends forever … When we were going to be representatives at the Golden Globes, they always send you [material] that’s horrible with bad jokes so we both took it back to each of our writing staffs and [America] came up with some stuff, I came up with some stuff, and it wasn’t until the day of the event she sent me a copy and said, ‘What about this? It’s kind of funny.’

And I thought, ‘oh my God, that’s so funny because I’m always called Eva Mendez!’ So we both decided to be funny. It has caused such a macro- conversation but that was a moment where there is truth in jest and I think it went over very, very well.
TVS