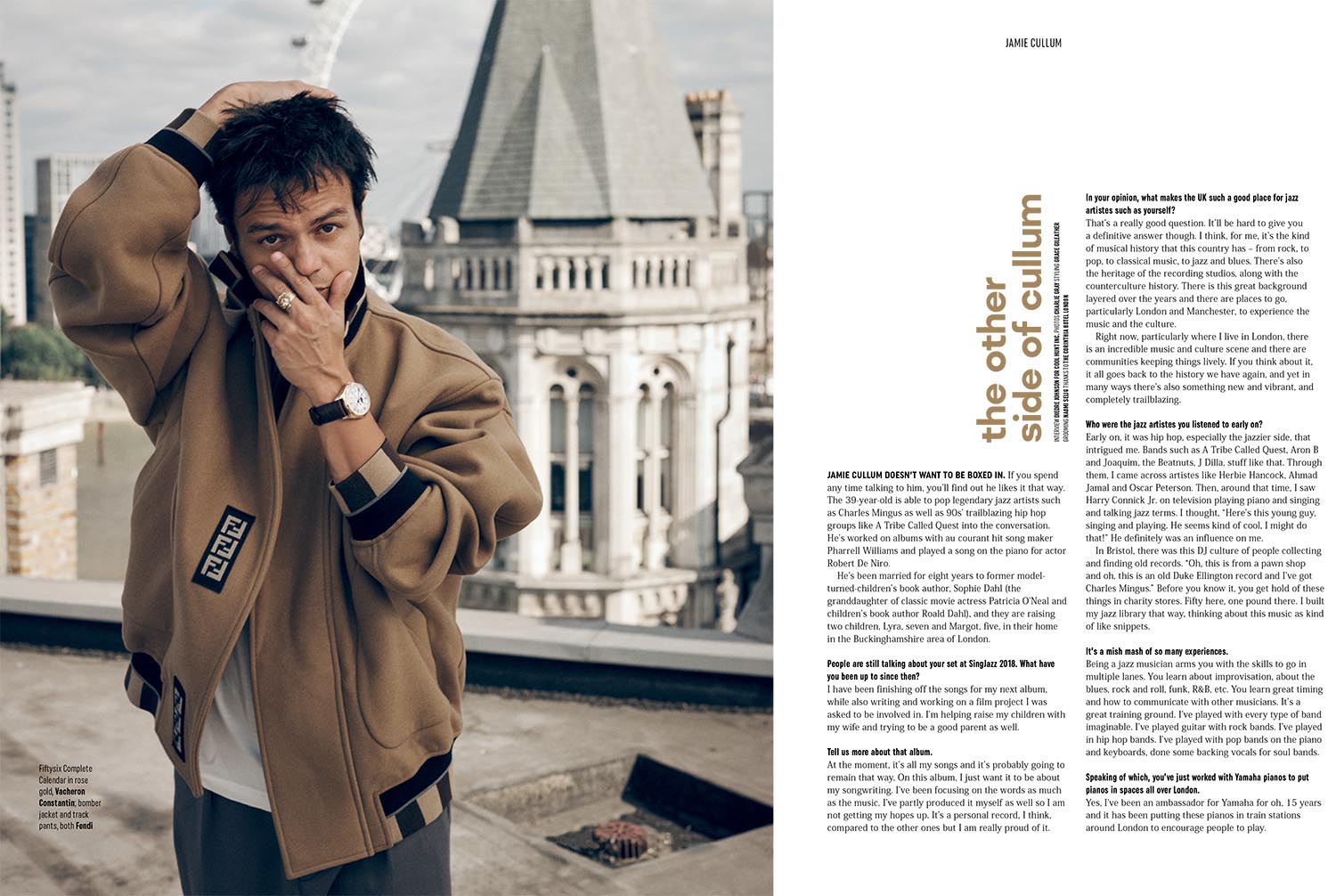 JAMIE CULLUM DOESN’T WANT TO BE BOXED IN. If you spend any time talking to him, you’ll find out he likes it that way. The 39-year-old is able to pop legendary jazz artists such as Charles Mingus as well as 90s’ trailblazing hip hop groups like A Tribe Called Quest into the conversation. He’s worked on albums with au courant hit song maker Pharrell Williams and played a song on the piano for actor Robert De Niro.

He’s been married for eight years to former modelturned-children’s book author, Sophie Dahl (the granddaughter of classic movie actress Patricia O’Neal and children’s book author Roald Dahl), and they are raising two children, Lyra, seven and Margot, five, in their home in the Buckinghamshire area of London.

People are still talking about your set at SingJazz 2018. What have you been up to since then?

I have been finishing off the songs for my next album, while also writing and working on a film project I was asked to be involved in. I’m helping raise my children with my wife and trying to be a good parent as well.

Tell us more about that album.

At the moment, it’s all my songs and it’s probably going to remain that way. On this album, I just want it to be about my songwriting. I’ve been focusing on the words as much as the music. I’ve partly produced it myself as well so I am not getting my hopes up. It’s a personal record, I think, compared to the other ones but I am really proud of it.

In your opinion, what makes the UK such a good place for jazz artistes such as yourself?

That’s a really good question. It’ll be hard to give you a definitive answer though. I think, for me, it’s the kind of musical history that this country has – from rock, to pop, to classical music, to jazz and blues. There’s also the heritage of the recording studios, along with the counterculture history. There is this great background layered over the years and there are places to go, particularly London and Manchester, to experience the music and the culture. Right now, particularly where I live in London, there is an incredible music and culture scene and there are communities keeping things lively. If you think about it, it all goes back to the history we have again, and yet in many ways there’s also something new and vibrant, and completely trailblazing.

Who were the jazz artistes you listened to early on?

Early on, it was hip hop, especially the jazzier side, that intrigued me. Bands such as A Tribe Called Quest, Aron B and Joaquim, the Beatnuts, J Dilla, stuff like that. Through them, I came across artistes like Herbie Hancock, Ahmad Jamal and Oscar Peterson. Then, around that time, I saw Harry Connick Jr. on television playing piano and singing and talking jazz terms. I thought, “Here’s this young guy, singing and playing. He seems kind of cool, I might do that!” He definitely was an influence on me. In Bristol, there was this DJ culture of people collecting and finding old records. “Oh, this is from a pawn shop and oh, this is an old Duke Ellington record and I’ve got Charles Mingus.” Before you know it, you get hold of these things in charity stores. Fifty here, one pound there. I built my jazz library that way, thinking about this music as kind of like snippets.

It’s a mish mash of so many experiences.

Speaking of which, you’ve just worked with Yamaha pianos to put pianos in spaces all over London.

Yes, I’ve been an ambassador for Yamaha for oh, 15 years and it has been putting these pianos in train stations around London to encourage people to play. 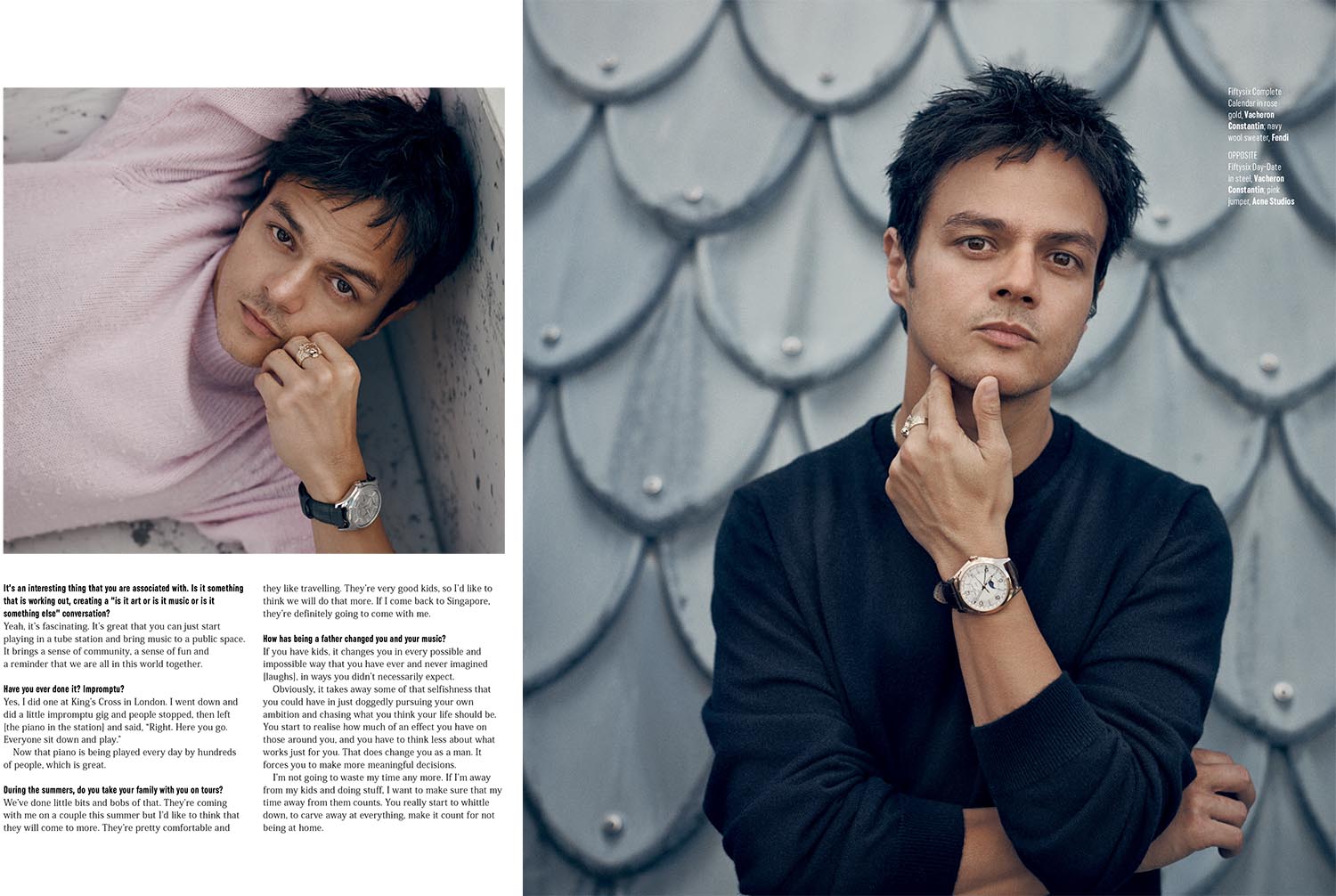 Yeah, it’s fascinating. It’s great that you can just start playing in a tube station and bring music to a public space. It brings a sense of community, a sense of fun and a reminder that we are all in this world together.

Have you ever done it? Impromptu?

Yes, I did one at King’s Cross in London. I went down and did a little impromptu gig and people stopped, then left [the piano in the station] and said, “Right. Here you go. Everyone sit down and play.” Now that piano is being played every day by hundreds of people, which is great.

During the summers, do you take your family with you on tours?

We’ve done little bits and bobs of that. They’re coming with me on a couple this summer, but I’d like to think that they will come to more. They’re pretty comfortable and they like travelling. They’re very good kids, so I’d like to think we will do that more. If I come back to Singapore, they’re definitely going to come with me.

How has being a father changed you and your music?

If you have kids, it changes you in every possible and impossible way that you have ever and never imagined [laughs], in ways you didn’t necessarily expect. Obviously, it takes away some of that selfishness that you could have in just doggedly pursuing your own ambition and chasing what you think your life should be. You start to realize how much of an effect you have on those around you, and you have to think less about what works just for you. That does change you as a man. It forces you to make more meaningful decisions. I’m not going to waste my time any more. If I’m away from my kids and doing stuff, I want to make sure that my time away from them counts. You really start to whittle down, to carve away at everything, make it count for not being at home.

With your wife Sophie involved in books and art, and you in music, it must be a tremendous household for your children. Have they started to react to this?

Yeah, I think we downplay it because I want them to discover it on their terms. So what we do is we expose them to great literature and music, whether it’s The Beatles or Nina Simone but I don’t want them to feel like, “Oh, Mommy and Daddy know lots about this.” I want them to discover that curiosity without feeling like it comes with the baggage of what we bring to the table. It is something you need to fall in love with yourself.

Speaking of books and music, what are your other passions?

I love reading. I have a great passion for it, when I have time, mostly when I’m not making music or I’m just with my kids, hanging out. I love to cook as well. I can cook a proper and beautiful Sunday roast – roast chicken, roast potatoes, puddings, roast beetroot with horseradish, parsnips and honey carrots. I quite enjoy eating and drinking with friends besides reading great literature. I like simple pleasures – not making things so complicated. I’m realizing that more and more as I get older.

I understand you love Japanese clothing brands. How would you describe your style?

Now we’re talking. I really love Japanese brands like Undercover, Neighborhood and Wacko Maria. Sometimes I walk out of the house wearing everything Wacko Maria except my underwear [laughs]. I think I am able to own my style now. You know, as a 39-year-old man. I think that comes with the confidence of age. I’m more confident in myself. I realized you can appreciate clothes the same way you can appreciate a great watch or camera. A decade ago, I didn’t really have a sense of personal style. Now, I would say it’s mostly black, some rockabilly type shirts, short sleeves, boots, jeans and a great jacket. That’s pretty much what I wear day in and day out, at the moment. Jeans, a great T-shirt with interesting colors and a nice rockabilly shirt in black. I am wearing my hair short these days.

You mentioned watches. What do you like about them?

I like vintage watches. I have a small collection of them, brilliant watches from the ’60s. I love beautifully made things and I enjoy looking at other people’s watches. I don’t know whether I would call myself a watch guy but I really appreciate watches, that’s for sure.

Is there any symbolism present in vintage watches that you think applies to your music?

I am fond of artistically made things that are built to last, whether they are cameras, watches, cars, art, etc. Things that were meant to be around longer than most humans. It’s not about being expensive. I don’t like things that are over-engineered, so to speak. I prefer them to be fully optimized and have a timeless feel and I hope my music is like that.

Talking about over-engineering, what do you think about smartwatches and mechanical watchmaking?

Well, watchmaking is an art form and these days, no one needs a watch, which is what makes it all the more wonderful for a man to wear something that isn’t just jewelry but actually an item that achieved a huge amount of beautiful expertise in engineering. If you think about it, this tiny thing on your wrist is the summation of thousands of hours of expertise in design, artistry and clever engineering. It’s a bit like music, really.

You’ve been in music for about two decades. Have you had a highlight in your career?

Yeah, working on the theme song for the Clint Eastwood film, Gran Torino. It felt like the pinnacle of my career at that time to have penned its lyrics. I was given the script by Clint Eastwood, and his son Kyle [Eastwood, a jazz musician himself] was the one behind the movie’s score. I just ran with the music that Kyle had already come up with, and wrote the lyrics to the song rather than let myself be overruled by the enormity of the situation. That turned out well, but to have that come off as well as it did was matter of timing too. I don’t think I would have been able to do the song if this had happened two years before it did, as I wouldn’t have had the confidence nor right experience. When the opportunity came, I was really warming to the idea of being a songwriter more than anything else, so it helped me work towards my songwriting aspirations. That really helped the second part of my career. It’s the thing I had wanted beyond everything else in my professional life.

Not really. I love movies but I don’t want to act. To be good at something, you need to work at it for a long, long time. You can jump around and do many things in any industry, and you can get great joy in meeting people. But, as far as the entertainment industry goes, I want to be a better songwriter and musician. These are my goals.

As if you haven’t already achieved that.