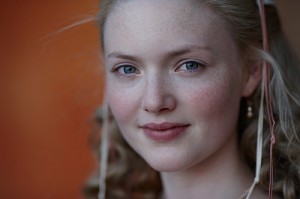 You probably don’t remember exactly how but it echoes through your mind that Lucrezia Borgia was a bad, bad girl. Well, (La cree zee ah as it is pronounced) Borgia, along with the rest of her family is getting ripped from the pages of history for another look in Showtime’s approximately 40-million-dollar miniseries: The Borgias. Below is a quick few with Holliday Granger on her character and meeting co-star Jeremy Irons.

Did she really poison people left and right?

HG:There seems to be numerous interpretations of Lucrezia, from being a complete victim of her family’s sort of power and being just yeah, kind of a victim. And then at the other side, there are instances where she really was the kind of the manipulative villainess that people believe. So I think there’s quite a lot of tension in her character.

How much did you study about the history of Lucrezia?

HG: I read a few biographies, a few on the Borgia family and then a few on Lucrezia herself. A woman called Maria Bellonci, an Italian, studied loads about Lucrezia and I found her biography really useful.

Have you spent much time in Italy?

HG: My granddad’s Italian so I have been over there throughout the years. He lives in a little village outside of Rome in the mountains. I haven’t been back for years but I’m going to go back and explore the areas that Lucrezia lived. Apparently Lucrezia’s sister-in-law got someone to follow her around and write down her daily actitivities and 700 of those letters still exist; of exactly what [Lucrezia] was wearing, who she met, when she met them, so it will be fascinating to get to kind of flip through them and see actually what she did on a day-to-day basis.

Had you met Jeremy Irons before working with him?

What did you do upon first meeting him?

HG: You know, he’s a lovely guy and he really brings something to the scenes and he’s got some great suggestions so it’s brilliant to work with someone with so much experience.