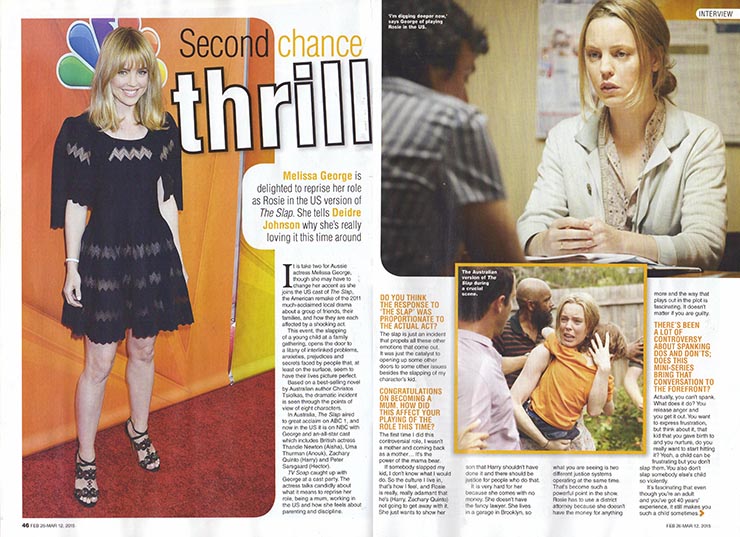 Melissa George is delighted to reprise her role as Rosie in the US version of The Slap. She tells Diedre Johnson why she’s really loving it this time around.

It is take two for Aussie actress Melissa George, though she may have to change her accent as she joins the US cast of The Slap, the American remake of the 2011 much-acclaimed local drama about a group of friends, their families, and how they are each affected by a shocking act.

This event, the slapping of a young child at a family gathering, opens the door to a litany of interlinked problems, anxieties, prejudices and secrets faced by people that, at least on the surface, seem to have their lives picture perfect.

Based on a best-selling novel by Australian author Christos Tsiolkas, the dramatic incident is seen through the points of view of eight characters.

In Australia, The Slap aired to great acclaim on ABC 1, and now in the US it is on NBC with George and an-all-star cast which includes British actress Thandie Newton (Aisha), Uma Thurman (Anouk), Zachary Quinto (Harry) and Peter Sarsgaard (Hector).

TV Soap caught up with George at a cast party. The actress talks candidly about what it means to reprise her role, being a mum, working in the US and how she feels about parenting and discipline.

DO YOU THINK THE RESPONSE TO ‘THE SLAP’ WAS PROPORTIONATE TO THE ACTUAL ACT?
The slap is just an incident that propels all these other emotions that come out. It was just the catalyst to opening up some other doors to some other issues besides the slapping of my character’s kid.
CONGRATULATIONS ON BECOMING A MUM. HOW DID THIS AFFECT YOUR PLAYING OF THE ROLE THIS TIME?
The first time I did this controversial role, I wasn’t a mother and coming back as a mother… It’s the power of the mama bear. If somebody slapped my kid, I don’t know what I would do. So the culture I live in, that’s how I feel, and Rosie is really, really adamant that he’s (Harry, Zachary Quinto) not going to get away with it.
She just wants to show her son that Harry shouldn’t have done it and there should be justice for people who do that. It is very hard for her because she comes with no money. She doesn’t have the fancy lawyer. She lives in a garage in Brooklyn, so what you are seeing is two different justice systems operating at the same time.
That’s become such a powerful point in the show. Rosie has to use a district attorney because she doesn’t have the money for anymore and the way that plays out in the plot is fascinating. It doesn’t matter if you are guilty.
THERE’S BEEN A LOT OF CONTROVERSY ABOUT SPANKING DOS AND DON’TS; DOES THIS MINI-SERIES BRING THAT CONVERSATION TO THE FOREFRONT?

Actually, you can’t spank. What does it do? You release anger and you get it out. You want to express frustration, but think about it, that kid that you gave birth to and you nurture, do you really want to start slap them. You also don’t slap somebody else’s child so violently.
It’s fascinating that even though you’re an adult and you’ve got 40 years’ experience, it still makes you such a child sometimes.’

WHAT’S THE DIFFERENCE BETWEEN DOING THE SERIES IN AUSTRALIA AND NOW BEING IN THE US VERSION?
You know, it’s bizarre for me because I sat back and thought I would have to erase a lot of what I did the first time around, but I haven’t had to do that.

First of all, when you speak as a New Yorker, it’s such a flow but, yes, there have been moments when watching everybody else discover their roles is just fascinating.

I’m digging deeper now. I got a second opportunity. I’ve worked 20 years in America and 15 years in Australia, so I’ve lived and worked in the United States longer than in Australia, so it was interesting for me to go back home to do The Slap because I was relearning the Australian culture.

HOW WERE YOU RAISED, DID YOU GET SPANKED?

My folks kind of tried, but I was so quick, I’d be out down the street. It was the late ’70s t? Yeah, a child can be frustrating but you don’t thing and they’d have a little stick to use in case you stepped out of line. We’d have family conversations every Friday and talk about what we liked and what we didn’t, and we were quite expressive and open, but no… no spanking.

HOW DID YOU THINK IT WOULD FEEL WITH ANOTHER ACTRESS IN ROSIE’S SHOES?

Actually, I did think about that a lot and apparently they tried to look, so I don’t know. I think I’m just an advocate for Rosie. I believe she’s right, so everything I do is easy because she’s completely right and he’s totally wrong.

WHAT WAS THE MOVIE YOU GAVE UP?

WHO GOT THE PART?

I don’t know. I was scared to look but I don’t regret it for a moment. I’ve got another two months of shooting…

IS IT HARD TO DO THE BROOKLYN ACCENT?

No, because when I was in In Treatment on HBO in 2008, there was so much dialogue in one room and I was an American in that. She’s got a Brooklyn accent but we’re fine- tuning when she’s speaking to someone with a lot of money, so instead of come ‘heh, she’ll add an ‘R’ (come here) so we’re almost cultivating it.

I have somebody on set listening to every word and we’re changing it depending on who she’s talking to, because she lives in a garage in Brooklyn, has no money, doesn’t wear shoes and breastfeeds her son. So, she’s a little hippie and when she’s alone she might flare out the New Yorker a little more, but it is nice to zip it up when she’s talking to the

DA. HOW DID YOU LOSE THE BABY WEIGHT?

Breastfeeding! I was working 10 days after giving birth (to son Raphael). I was doing a pilot. I flew to New York from Paris to work. 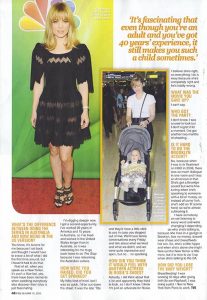