Per usual, Sundance may be the location of some undiscovered film gems.

This year the whispers are about Dope, the story a bunch of smart kids from Inglewood, CA who, through circumstance, end up pushing ecstasy, instead of tech.

Aloft, a Spain France and Canada import starring Jennifer Connelly as a person who heals and gets that chance in another way, when she reconnects with the son she gave up (played by the beautiful Cillian Murphy). Wow, two beauties together.

Finally Saoirse Ronan (remember her from Atonement?) stars in Brooklyn, about an Irish woman who comes to 1950s’ New York and feels out of place despite her efforts to blend.

There are others: Sleeping WIth Other People for one, The Standard Prison  with Callan McAuliffe, The Overnight, etc. There are stars galore:

The good folks 😉 at IMDB and Amazon Instant Video Studio were kind enough to drop me a few pix and news. So, here’s my little contrib. to Sundance 2015. Enjoy. 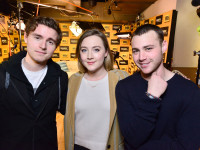