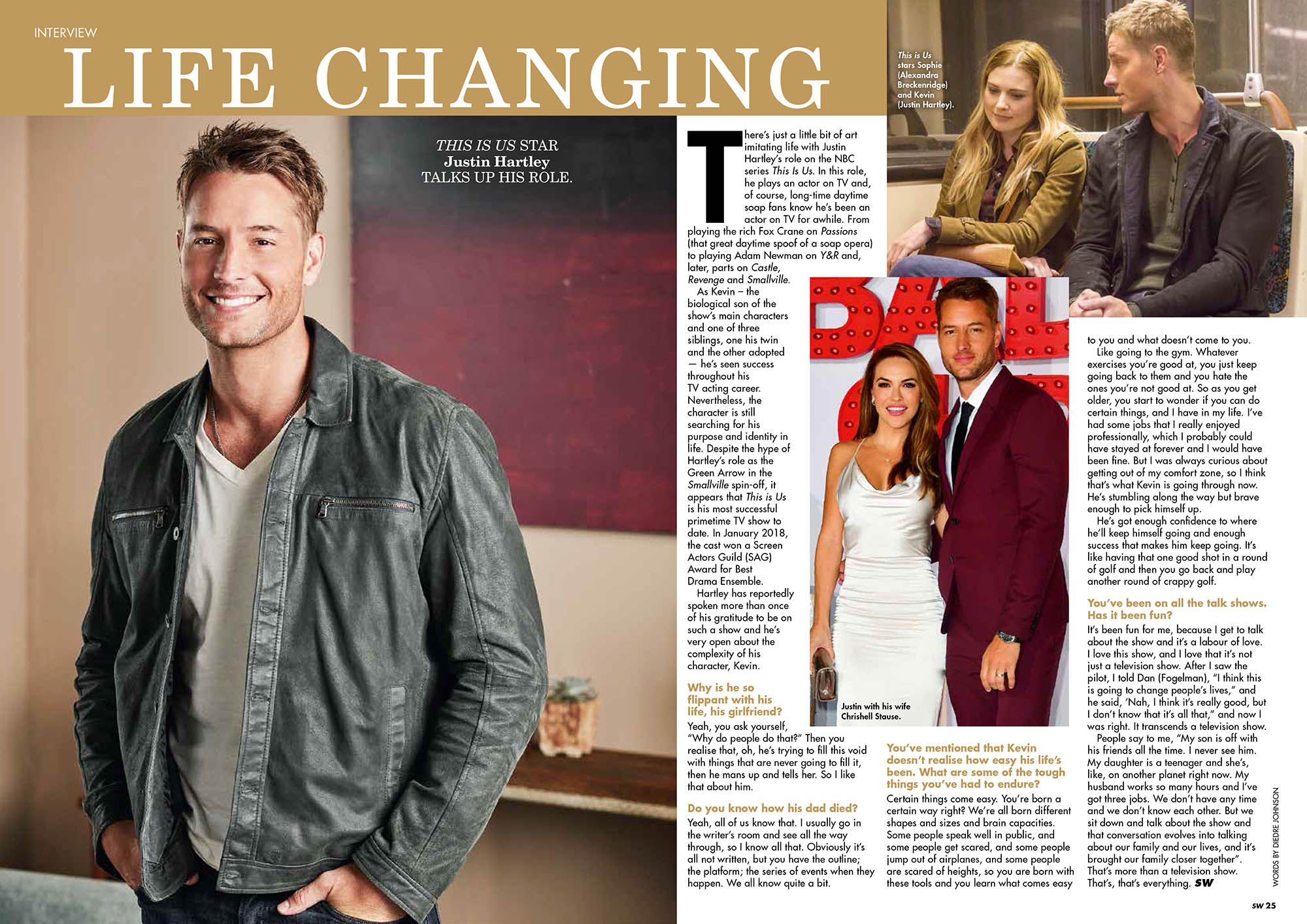 There’s just a little bit of art imitating life with Justin Hartley’s role on the NBC series This Is Us. In this role, he plays an actor on TV and, of course, long-time daytime soap fans know he’s been an actor on TV for awhile. From playing the rich Fox Crane on Passions (that great daytime spoof of a soap opera) to playing Adam Newman on Y&R and, later, parts on Castle, Revenge and Smallville.

As Kevin – the biological son of the show’s main characters and one of three siblings, one his twin and the other adopted — he’s seen success throughout his TV acting career. Nevertheless, the character is still searching for his purpose and identity in life. Despite the hype of Hartley’s role as the Green Arrow in the Smallville spin-off, it appears that This is Us is his most successful primetime TV show to date. In January 2018, the cast won a Screen Actors Guild (SAG) Award for Best Drama Ensemble.

Hartley has reportedly spoken more than once of his gratitude to be on such a show and he’s very open about the complexity of his character, Kevin.

Why is he so flippant with his life, his girlfriend?

Yeah, you ask yourself, “Why do people do that?” Then you realize that, oh, he’s trying to fill this void with things that are never going to fill it, then he mans up and tells her. So I like that about him.

Do you know how his dad died?

Yeah, all of us know that. I usually go in the writer’s room and see all the way through, so I know all that. Obviously it’s all not written, but you have the outline; the platform; the series of events when they happen. We all know quite a bit. Life changing interview This is Us Star Justin Hartley Talks Up His Role.

You’ve mentioned that Kevin doesn’t realize how easy his life’s been. What are some of the tough things you’ve had to endure?

Certain things come easy. You’re born a certain way right? We’re all born different shapes and sizes and brain capacities. Some people speak well in public, and some people get scared, and some people jump out of airplanes, and some people are scared of heights, so you are born with these tools and you learn what comes easy to you and what doesn’t come to you.

Like going to the gym. Whatever exercises you’re good at, you just keep going back to them and you hate the ones you’re not good at. So as you get older, you start to wonder if you can do certain things, and I have in my life. I’ve had some jobs that I really enjoyed professionally, which I probably could have stayed at forever and I would have been fine. But I was always curious about getting out of my comfort zone, so I think that’s what Kevin is going through now. He’s stumbling along the way but brave enough to pick himself up.

He’s got enough confidence to where he’ll keep himself going and enough success that makes him keep going. It’s like having that one good shot in a round of golf and then you go back and play another round of crappy golf.

You’ve been on all the talk shows. Has it been fun?

It’s been fun for me, because I get to talk about the show and it’s a labor of love. I love this show, and I love that it’s not just a television show. After I saw the pilot, I told Dan (Fogelman), “I think this is going to change people’s lives,” and he said, ‘Nah, I think it’s really good, but I don’t know that it’s all that,” and now I was right. It transcends a television show.

People say to me, “My son is off with his friends all the time. I never see him. My daughter is a teenager and she’s, like, on another planet right now. My husband works so many hours and I’ve got three jobs. We don’t have any time and we don’t know each other. But we sit down and talk about the show and that conversation evolves into talking about our family and our lives, and it’s brought our family closer together”. That’s more than a television show. That’s, that’s everything